Zweibrucken, a story of a CF-104 pilot 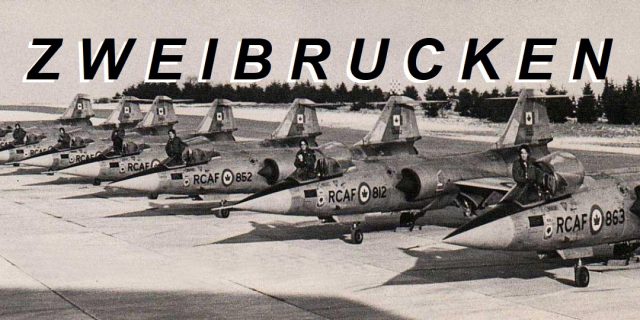 Story beneath was written by CF-104 pilot Bob Hyndman. He trained as F/O with 6 ST/R OTU and went to 427sq in Europe to fly the CF-104 at Zweibrucken.

Way back in the early sixties I lucked in with a posting to join 427 Strike Squadron then working up with 12 pilots in Zweibrucken, West Germany.  Originally I was to be their simultor driver but after some time assisting Bob Ayers in testing newly assembled aircraft and no simulator forthcoming from CAE I was brought onboard as Atlas 33. Our O/C was the very friendly, able and experienced Bob Middlemiss* with a hard earned Spitfire and Battle of Malta reputation. Atlas 20. A wonderful boss, he had been heavily involved in the 104 selection process and knew the aircraft intimately. My background was 1000+ hours in two CF-100 tours and I was the first to join without a Sabre background. Early on I had been very nearly court martialed for low flying in a CF-100 and this may have brightened my resume.

The Berlin Crisis was then winding down but the Cuban Crisis and a very Cold War was still with us. On receiving nuclear weapons we became heavily involved in the Nato Tactical Evaluation and Operational Readiness Inspections, ‘Tac Eval’ to the squadron pilots. All pilots had no notice Tac Eval rides once or twice a year, sometimes in the two seater CF-104D, but usually with a Metz headquarters pilot riding shotgun. I encountered three Tac Eval pilots during my time with The Lions, Paul Argue, Tony Bosman and Tappy Carruthers. All had reputations as great pilots and committed lifers destined for promotion.

On arriving at the squadron dispersal early in the morning and having checked the weather and the board to see if I had a flying slot, Paul would appear with a stern look, pass me a strip map and a pre-programmed SSU cassette for my navigator, the Litton LN-3. Then it was ‘OK Bobbie let’s go’. Out to the aircraft for a quick walk around, an LN3 alignment and startup.  My aircraft would have a bomb dispenser mounted on it’s centerline rack containing one small bomblet.  An airman would climb the ladder behind me and assist in my getting settled and fastening the many clips and lanyards required. A tap on my helmet and he retreats. Ready, I signal for air and soon hit the start switch. A quick taxi to the arming point and an armorer would dart under the wing, show me the pins and wave me on.

‘Atlas 33 plus 1, Takeoff’. ‘Atlas 33 cleared for takeoff’. I line up on the left side of the runway. 8700 feet remaining. I quickly review my abort drill and stand on the brakes. Throttle smartly to full military. 100%, EGT near 600, oil pressure, fuel flow. Chop the throttle to idle, IGVs and nozzle tracking-all ok. Throttle again to full military, the engine howls, a glance towards Paul in the slot. I nod my helmet forward, release brakes, then throttle outboard and advance. The burner lites and I push the throttle to the wall.

Acceleration is very rapid. Keep it straight. 100 knots. 150. At 170 I start the stick back. Then it’s gear up before 260. Quickly level at 200 feet. Burner out and flaps up. 87% will give me about 450 knots. Search for the Hack Point and check on Paul in my rear view mirror. He has moved out to battle and sits a little above and behind me. He stays mute for now. We hit the hack point and I quickly start my clock and roll into the turn. These are early days in the 104 program and we are blessed with few rules and regs.

The first turn. Turns are quick and crisp. Rate one is 45 degrees of bank, rather more than less. I flip my map folder to the next page and turn point, rolling out on the next track. 450 knots, not less. 450 is our low level max range speed. There is usually little drift from lite low level winds. The view out the front and off to the sides is spectacular and makes the job easier. The 104 is a delight to fly at this speed with beautifully balanced lite controls. She is tiny for a warship and difficult to see coming head on. The small thin seven foot wings yield a very smooth ride. The LN3 clicks off the miles to go to the next waypoint and displays an accurate heading. Paul will expect me to stay within a hundred meters of track and plus or minus 3/5 seconds at our turn points. He has a sister to my map folder. Our routing and turn points are designed to mimic the avoidance of SAM batteries, towns, and other hazards, and turn points are easily identified-once one is directly on top of them.

River bends are a favorite turn point. We need something that will show on radar at nite or in foul weather. Nite and cloud at these speeds can be nasty business. At first we flew our nite routes at 500 feet but soon increased it to 1000 AGL for each of the legs on our route. We had in the aircraft nose a NASARR radar. I was not impressed. It had a mapping function difficult to manage in a single seater. It also had a forward looking radar altimeter function that I found next to useless. Our fitters spent hours trying to calibrate the damn box with little success. One otherwise quiet nite in the clag I was startled by a bright light on my left. Looking out I sped by a Canberra PR-8 with a few feet to spare. All black. No nav lights but his cockpit lights were on bright! Probably heading for the same river bend as I.

Paul stays mute. We approach the first PUP. Push Up Point-it’s now enemy coast ahead. Throttle up and start downhill. I steady at 100 feet and 540 knots. It’s clickety clack-stay on track. Villages, trucks, trains all drift by. The occasional cyclist. Nobody hears me coming. I scan for chimneys and smoke. Paul is still with me at 5 o’clock high. I approach a low range of hills and start up a little early, skim the top then down tight to the backside. Some of our training routes take us into the foothills of the Alps but we stay away from the mountains. I scan for gliders and lite aircraft. Their fields are not marked on our maps and this my first time on this CPM. Fuel is good. I run thru my bombing checklist. Farming country now with few obstacles. Green forests in the distance. Good country for Patton’s tanks.

Time to check in. ‘Suippes Range Atlas 33 plus one’. ‘Atlas Suippes, the range is clear’. ‘Suippes Atlas 33 single laydown’. ‘Atlas roger, call leaving the range’. The final outbound turn comes up and I turn  to the attack heading. Timing good. Track good. Complete the bombing checklist and PUP. Throttle up. 600 knots. 596 KIAS corrected. A slight burble from the open dispenser doors. I drift down. ‘I have smoke at 11 o’clock’. ‘Roger’. I offset a smidge to the left and speed comes back a few knots for a tailwind correction. Throttle set. My vision now all tunnel and my adrenaline up. Track-speed. Speed-height. Watch the trees. My eyes now see only a narrow cone dead ahead-off to the sides much is a blur. Power lines and trees. I pass over a country road. My bomb release height is the laydown standard 50 feet AGL. For every foot I am high at release the bomb will be 10 feet long. ‘ I have the target’. A click click on his UHF from Paul. 50 feet steady, steady. NOW-I press the pickle button and the target sweeps by on my right.

I apologize if the above seems too much of Atlas 33. A lot of other people worked hard long hours to get me to this mock target. While the 104 was a superb aircraft for this the role it could sometimes be a real headache for those on the base tasked with keeping our machines ready and airborne. They also had their ‘Tac Evals’, indeed sometimes the whole base was pushed to its limits.

I climb to 200 ft and slow down. Flip my folder to the next page. ‘Suippes Atlas 33 has left the range. Switches off’. ‘Atlas 1 o’clock at seven zero. Good day’. My bomblet emitted a puff of marker smoke when it struck the range. I was late on my pickle with not enough offset. In a green Squadron book somewhere there is a photo of an armorer and I underneath a 104. He is explaining to me the operation of the dispenser and the bomblet. Can’t find my book.

In bad weather the bomb would be dropped by flying a LADD. The Low Altitude Drogued Delivery. We never did this on Tac Eval that I recall-the delivery maneuver was just too hairy. It involved navigation to a prominent radar fix close to the target and then with the use of two timers tossing the 2000 pound weapon at a point in space where the ‘shape’ would drift down on a parachute. We trained for this at the Italian range in Decimomannu, Sardinia or on a sandbar island on the West German coast whose name I have forgotten.

One bumpy day while running in towards a radar target at 500 feet and 540 knots my autopilot disengaged and the aircraft bunted hard down. I grabbed the stick and hauled back just barely avoiding the trees. Climbing away I saw the cockpit warning lites indicating my gear had extended. Some time later, at the other end of the runway with hook extended, the chute still on, and the barrier just yards ahead, I noted the hydraulic quantity now zero . A fire engine cooled the brakes. When a ladder finally arrived I climbed down to find the undercarriage doors all gone, the flaps front and rear wrecked and twenty plus schrapnel holes in the aft end and tail. Phil, our maintenance boss, was not amused. In the mess that evening I would have had to ante up on the Parkbrau.

Of the original 12 pilots I think only one survives today. On returning to Zweibrucken some years ago I found the base overtaken by USAF F4s.  The gate guards turned me away. I had a nice stay at the Hotel Hasengarten and walked the town. Years later I was hiking on my own in the south of France, trying to keep fit. I was somewhere east of Orange when I heard that sound.  Off to the west I caught the familiar shape of a Mirage low down and speeding northeast towards the foothills. Soon followed by eleven more, all loaded for bear and each a minute or two apart. Well well. Must be either WW3 or Tac Eval! I kept on walking. And remembering Zweibrucken and my time with 427.