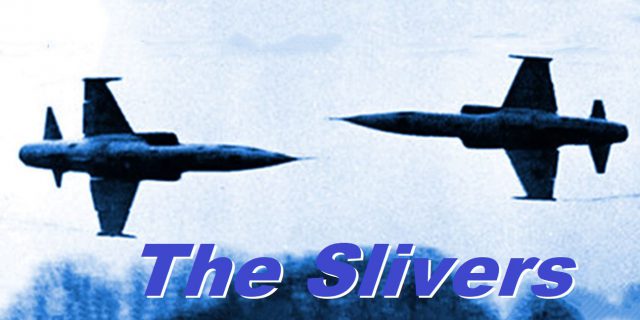 The Slivers were a Belgian Air Force aerobatic team consisting of a pair of F-104G Starfighters. Formed in 1969, they were the first team in the world to perform aerobatics as a team with the F-104. When they closed down in 1975 they had performed a total of 79 shows without a single accident.

How the team was born

In 1966 Major Bill Ongena, who was the official demonstration F-104 pilot of the Belgian AF and also one of the original members of the Acrobobs aerobatic team (precursor of the Red Devils team) flying the Meteor F.8, was promoted to a new function in the national defence office. He was succeeded by Captain François “Susse” Jacobs, who had been part of the Red Devils demo team when they flew the Hawker Hunter. Unfortunately Susse lost his life soon after taking up the assignment. On the 2 nd of September 1968, during the taking of an episode of the French television series “Les Chevaliers du Ciel” something went wrong during a “touch-roll-touch-and-go” manoeuvre and Susse was killed in spite of a last-minute ejection. After this crash the General Staff of the Belgian AF banned all demos on the F-104. Only after lengthy discussions with the concerned authorities and a lot of personal efforts by Colonel Paul De Wulf, CO of Beauvechain AB and another of the original members of the Acrobobs aerobatic team, permission was granted to re-start the demo flying with the Starfighter.
In the beginning the idea was to have a team with one pilot from each Beauvechain Squadron (349/350), but this proved impractical from a viewpoint of availability for training. Captain Steve Nuyts, who had been flying the spare F-104 for Susse’s displays and who was considered by Susse as a potential member of his future F- 104 team volunteered from the beginning and could finally convince Warrant-Officer Palmer De Vlieger to become the second member of the Slivers. After a lot of training the Slivers made their first public appearance on the 14 th of May 1969 as “special guests” for a graduation ceremony at Brustem AB.

The genesis of the name “Slivers”

The famous Lockheed test pilot Glenn “Snake” Reaves called the F-104 the “Silver Sliver” because of the long shiny fuselage and stubby wings of the Starfighter. This name stuck also with the forthcoming Belgian demo pilots and so they decided to use “Slivers” as the name for the team.

The Slivers were the first team in the world to perform aerobatics as a team with the F-104. Close to the ground and at speeds in the region of 400 knots IAS (approx. 800 km/h) the two pilots moved their jets with such ability and self-control that they succeeded in crossing each other exactly on a well determined point and this in complete synchronization. Also, despite the high “G” forces due to the high-speed maneuvering and the poor turning performance of the Starfighter, the pilots were successful in keeping their display close to the spectators. The separation between the two planes during their crossings varied between 10 meters and 2 meters … with one pilot flying above the runway and one above the grass next to it. The respective positions were announced by radio: “left concrete” and “left grass”. In all the Slivers flew 79 breathtaking but completely accident-free flying displays during 7 seasons, and this in the United Kingdom, France, Germany, Italy and of course Belgium. The first show took place on the 14th of May 1969 and the last one on the 11 th of July 1975. The team was disbanded when Steve Nuyts was promoted to Major and nobody was found to replace him as leader of the Slivers.

Based upon available photographic evidence, the Slivers used mainly two types of helmets during their period as a team. Steve always had an HGU-2A/P dual visor single piece ramshorn helmet, but Palmer used also a single visor HGU helmet for some time, before switching to the dual ramshorn. Steve dropped his helmet at some point in time which led to its replacement by another ramshorn. Their helmets were equipped with white styrene inner liners and brown leather pads and spring retention arms for the headphones (the so-called H154/AIC headset). The communication leads were standard for the period, as well as the MBU-5/P masks with “T” bayonets fitted in white cast receivers. Initially the helmets were in standard Belgian AF 350 Squadron colors (with distinctive personal touches for each pilot), but after a while they had their visors painted in red with two white crossing F-104 silhouettes. If it was on purpose or not cannot be ascertained, but the two F-104’s were almost exactly on scale 1/72nd !
The flight suits were originally the standard orange or olive green color with 350 Squadron patches, but as of the season 1972 they got their light blue colored ones with their name embossed upon a round Belgian F-104 patch on the left-hand side and a specially created Slivers patch on the right-hand side. The flight suits and Steve’s helmet are on public view in the Beauvechain AB museum. The pictures shown of Steve’s helmet and the flight suits were taken at this location.

With the help of the Slivers team and good friend Peter Gordts I was able to create a complete Slivers flight gear outfit for my private F-104 flight gear collection. You can see me dressed up as Slivers pilot in and standing in front of Roger Seroo’s private F-104, the most beautiful natural metal zipper at that time, which was sold afterwards by Roger and which according to IFS info should be in Germany now.

Steve Nuyts (1937-2018) got his wings in 1957. He flew the following types during his active career : Meteor, Hunter, Fouga Magister, T-33, F-104, F-16 and Alpha Jet and amassed a total of 5.045 flying hours of which 1.403 hours on the Starfighter. He made his last active flight in a Fouga on the 23 rd of December 1983 but continued flying as reserve pilot, making his final flight (again in a Fouga) on the 13 th of December 1994. He retired as a full Colonel and passed away on the 12 th of March 2018.
Palmer De Vlieger (1931-2020) graduated as a pilot in 1954. He too flew a lot of different aircraft types in the Belgian AF and clocked a total of 4.459 flying hours, of which almost 2.203 hours in the F-104. Palmer was one of the first Belgian pilots to fly the One-O-Four and flew his last mission also in the Lockheed machine on the 22 nd of December 1976. After his BAF years Palmer made a new and successful career in the brewery business. He passed away on the 27 th of November 2020.
Warrant-Officer Raymond Delestinne (1932-2022) was the dedicated crew chief of the Slivers during their flying period. Thanks to his technical knowledge and expertise not one show had to be cancelled because of technical problems. Raymond was also the driving force until his death behind the Beauvechain AB museum, where he was in charge of the planes kept or being restored there. He was the ideal man for the job, having worked on aircraft from the Spitfire up till the F-16! He passed away on the 3 rd of January 2022.

During their existence as a team the Slivers flew almost half of all the F-104 Starfighters in service with the Belgian AF. The planes were in standard Vietnam camouflage and flew always with the Sidewinder launch rails for additional stability in the turns. In the beginning the rails were white as per standard for Belgian F-104’s, but after a while the team wanted to be a bit “different”, so the rails were painted red with white “SLIVERS” lettering in the middle of the rail.
In addition to the rails, the Slivers also decided after some time that a more visual clue was necessary to distinguish their jets from the other Starfighters. For the national show on Sunday the 20 th of June 1971 in Brustem AB they put a red ball on the intakes of the FX-68 and FX-51 jets with the silhouettes of two crossing Starfighters superimposed in white, similar as what they had on their helmets by that time. The scheme was only used for that show, because the red paint did not survive the high- speed passes at low level … The white paint fared better, so it was agreed upon to paint the name “SLIVERS” in white on the intakes as of 1971 until the team was disbanded.
Of the planes they flew, Steve had a distinct liking for the FX-90 and Palmer for the FX-72. They also flew these jets on their last show at their home base in 1975 before a limited audience.