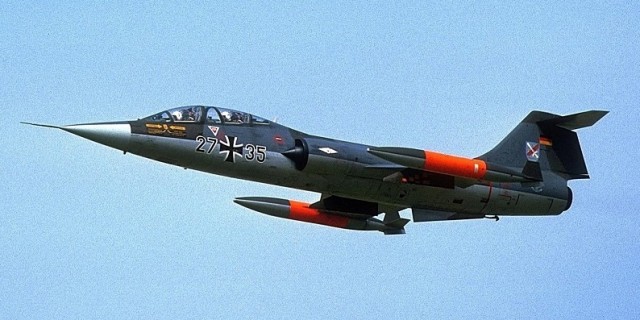 This interesting story was written by LtCol (ret) Heribert Mennen regarding a great and compatitive squadron exchange back in 1975!!

The squadron exchange with famous No 1 Sqn (Harriers) at RAF Wittering in the United Kingdom was one of JaboG 31’s highlights in 1975. I was lucky to participate in the deployment. It turned out to be a great experience, flying-/working-wise and on the social side. Our British friends were great hosts and organized interesting culture- and sight-seeing trips. That included a weekend in downtown London, where the Royal Air Force Association owns a small hotel. Additional bonuses were some fly-bys by aircraft from neighbouring airfields, incl. the majestic VULCAN. I felt like on a long-lasting Air Show.

The Nörvenich pilots proudly adopted No 1 Squadron’s badge on their helmets. But before they did so two men from their support crew (guess who was involved) had already zapped one of the RAF Harriers overnight – in line with No 1 Squadrons motto: „In omnibus princeps” which translates as „First in all things”. The senior British engineer (SEngO) was a bit irritated when he saw it, because the Harrier was locked away in a hangar! He ordered the zap to be removed immediately. What a pity I do not have a photo! The British revenge just consisted of their Squadron badge on TF-104G 27+35. (see photo beneath)

There were several Anglo-German competitions. The most memorable event however was „the race“ between a Harrier and a F-104. Of course everybody knew that the HARRIER held the world record in the category from brake release to 10.000 feet MSL. But we Germans wanted to find out ourselves.
Two aircraft were prepared for the competition: Harrier T.2 XW271 with the acting British squadron commander in the front cockpit and a German pilot on the backseat, plus TF-104G 27+35 with the German detachment commander in the front and a British pilot in the back.

Both British and Germans had great flyers among them. „Yogi” (3814 hrs on F-104) knew he had to do some cheating to have a real chance against the Brits with their Harrier. He ordered an engine test of clean 27+35 prior the flight „to prove all systems are working fine”. Of course the Brits immediately recognized that he only wanted to get away with unnecessary fuel / weight. But they were convinced they would win the race anyhow and so the game was started.

The TF-104G would use the main runway, while the Harrier T.2 would take off from the taxiway.
Unknown to the majority of the onlookers, a 10 seconds spacing had been arranged between the two aircraft due to low clouds.
We were standing at the other end of Wittering’s 9000 feet long runway when the aircraft started their spaced Take Off runs. To all the people watching from the distance it seemed the Starfighter was accelerating much faster than the Harrier. Yogi kept the aircraft very low until the end of the runway before pulling up sharply. With blazing afterburner and thundering noise it disappeared in the clouds a few seconds later. It was a perfect show.

The Harrier was about half runway length behind, but climbed immediately after lift-off far away from our position.
We Germans thought we had won. However this was not the case. The Harrier needed less time indeed. The British victory was complete when the TF-104G landed after about twenty minutes, while the Harrier-Trainer flew a normal sortie lasting about an hour.

(Beneath Kapt. J Imhof showing the adopted nr 1 Squadron badge on his helmet)

Anyhow, we enjoyed the show-race very much – and this memorable exchange.....

(Note: See more facts about this squadron exchange on our dedicated page here.