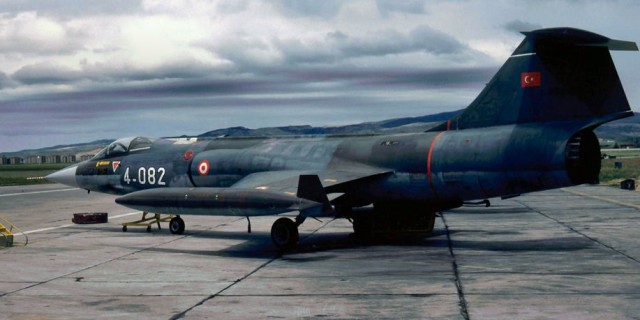 Late 70s the Turkish Air Force introduced a new serial system to identify their aircraft. The serial system showed a kind of mix between the German Luftwaffe and Italian serial systems. First digit belonged to the Air Base (4 was Murted, 6 was Bandirma, 9 was Balikesir and 8 was Diyarbakir). Also they introduced an "E" for training. The other three digits after a stroke identified the aircraft by using its last 3 digits of its construction number or USAF serial.

Layout of the digits showed similarity with the German aircraft. Black number with white surroundings. However it is unknown to lots of people that they also experimented with other layouts as well. One example was the ex Dutch Air Force 8082. It was delivered to the Turkish Air Force as USAF 63-8082 on December 15th, 1980 and immediately assigned to the Murted based 142 Filo receiving code 4-082. Around mid 1983 this aircraft was selected to test a white serial layout which was applied by painting over the black area of the numbers. The result was insane and as far as known no other aircraft was modified this way. Clearly this layout was not adopted and the earlier chosen layout continued until the last F-104 was phased out. Very strange to see that the system was never adopted by later aircraft like the F-16. The photo with this article was taken in June 1983 showing 4-082 with white serial at its homebase Murted. Soon after it was transferred to Balikesir becoming 9-082 until at least 1987.

Thanks to Hans Koning collections.