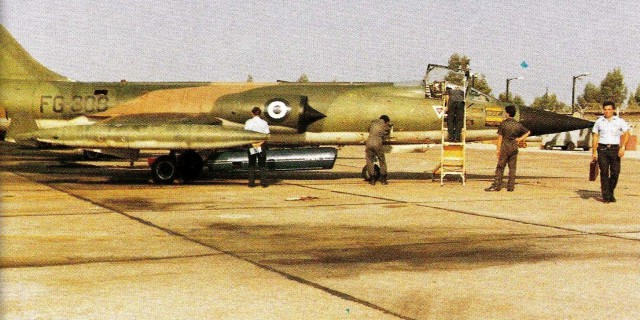 The Hellenic Orpheus I project.

At a certain moment the Hellenic Air Force, after all the RF-84Fs were being phased out, tried to find a way to continue their recconnaisance tasks on a better and more efficiant way.
For this reason the company "Advanced Technology Applications" (BOSA S.A. Aircraft Integrated Systems and Ground Support Equipment Manufacturer)  in Greece decided, early 80s, to develope a pod (actually by using a converted external fueltank) inside which the camera's from an withdrawn RF-84F were mounted. The Air Force tested this pod with F-104G 63-12308 in the summer of 1985 or in 1986 at the Test & Evaluation squadron at 116 PM.
Eventually the program was not accepted, or just cancelled because the requirement became fulfilled by the fleet of newly received RF-104Gs from the German Navy under the offsets for the order of the four MEKO 200 frigates.
It is unknown what happened to this prototype of the recce-pod, but it is very likely that it can be found on display today at BOSA S.A.

Not much more is known about this project, which surprisingly was called "Orpheus" (The Dutch and Italian Air Force used other recce-pods with the same name!!).

Thanks to Dimitris Adamopoulos, Savvas Vlasis, Kiriakos Palulian and BOSA for the information and photos of the pod itself beneath.