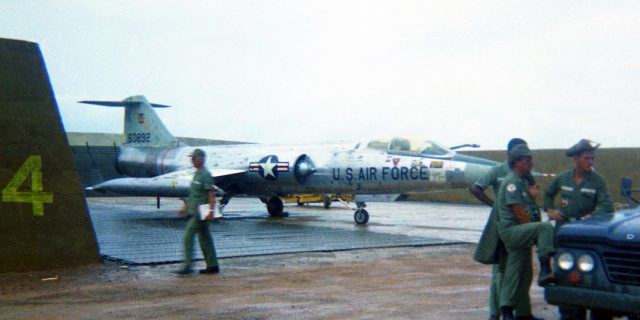 One of our International F-104 Society members, Larry Horn (74), was a SSGT technician within the US Air Force in the sixties. He served in the TAC 479 th TFW and also joined the SEA deployments in 1965 (Da Nang AB) and 1966 (Udorn AB). In this article Larry is sharing some of his thoughts, pictures and stuff describing his experience which has a great historical value.
The pictures mentioned inside his story can be found at the bottom of his written story.

I was in the initial deployment to Da Nang in 1965 with support of the 435th TFS and 436Th TFS Black Aces and later at Udorn with support of the 435 TFS in July, 1966, but unfortunately did not have a camera to memorialize the deployment at Udorn. After 2 months I was returned home to George AFB and given the “J” suffix on my specialty code locking me in to the F4 C/D for another year before I went on student status to the USAF Academy Prep School.

Da Nang 1965.
I was fortunate to have found a batch of negatives I thought lost.  They cover a portion of photos that I took with a little Zeiss-Icon 126 cartridge camera I had received the previous Christmas.
As you can see, between the age of the negatives and the quality of the camera, the photos leave one with amazement at the quality of photos taken today with phone cameras.

Several of the photos show details of our living conditions at Da Nang circa July 1965 to December 1965. They include our solar heated shower (Black painted tank out of view above the water heater that did not work). Also shown is a photo of the digging of zig-zag trenches we dug for protection against mortar and rocket attacks.  These were mostly filled with rank water when the monsoons came.  The one photo of the wider tent city was the entrance to the living area for the 436th TFS Black Aces.  All tents were 9-man wood pallet floor left over from WWII and Korea.
We had electricity and some tents (like mine) had fans and I even had an ice maker for a short period of time until the 1st sergeant acquired it for all tents usage!
There several photos of the planes on the flight line at the north end of the runway where our original line shack was located.  Also there, we had concrete prayed sandbag revetments with concrete pads that could accommodate 3 of our F-104C models per revetment.  In one photo you see one bird loaded with 750# gravity bombs and tip tanks ready for ground strikes and next to it was #70914 fitted with AIM-9 Sidewinders and underwing drop tanks readied for Mig Cap duties and Ready Intercept Alert for Migs which never showed up!  Consequently we were used primarily for Mig Cap and ground support primarily with napalm and the GE M-61 20mm Cannon used for bunker busting!  In another set of photos, you see that the revetments have changed and the apron is PSP Steel Mat (#60892 in photo).  We had moved to the south end of the runway previously occupied by F-102 and C-130 aircraft, several of which were destroyed by sapper attack after the F-102s were redeployed elsewhere.
One of the shots is of one of our pilots going to the line truck for transport back to officers country.  I don't remember who this pilot was but you can sure see the effects of rain on the deep red soil of the Da Nang base. I remember getting caught in a rainstorm with my Pancho on and water up to the top of my boots!
Another photo shows a truck bed with a partial load of 750# gravity bombs awaiting loading.  The F-4B Phantom was from the parent Marine Squadron of the Da Nang base.  We (The USAF) were just tenants on the base.
The only picture of me from Da Nang shows me holding a small dog.  That dog is the subject of the photo next to it.

I found back my certificate signed by Tony LaVier.  It was accompanied by a pin and a Tie Clip with the F-104 over an Outline of Vietnam in blue and black Cloisonne.
The small F-104 Pins were hand crafted by Taiwanese and we picked these up when at Kung Kuan Airbase in Taichung, Taiwan where the Nationalist Chinese had F-104A and G/TFG Fighters.
The Hats were also fabricated by Taiwanese craftsmen. One is for the 436th TFS (Black) and the other is the 435th TFS (Green).  Note: both had Kung Kuan and Da Nang references on it!