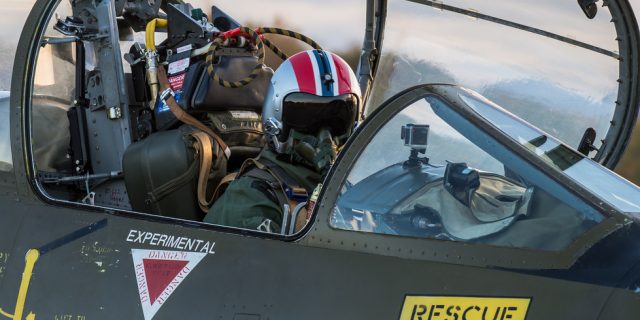 Thanks to Flynytt – Magazine for air and aviation / Lise Green Skar via Tom Svendsen.

Test Pilot Eskil Amdal (43) wrote aviation history when he took off on Wednesday with the F-104 Starfighter from Bodo Main Airport . It was 33 years since the last Starfighter was in Norwegian airspace.

- It was a wonderful experience. This was a boy dream come true, says Amdal to Flynytt.

When he got flying approval at 16.30h on Wednesday afternoon (28th September 2016), he was not at all sure that the Starfighter was going to take off.  Even when he taxied the machine towards the runway around an hour later. And when at 17:25 his aircraft accelerated for takeoff, he took nothing for granted.

- I was very excited. When I passed 170 knots down the runway, I realized that we were going to fly. Until then you can release the brake chute and arrestor hook and stop the machine. But as you rotate, then go! It really was not until the aircraft was in the air that it dawned on me that "now you fly, incredible!". It was absolutely amazing!

- But I never thought that I was going to fly it. It has only been a dream.

The CF-104D Starfighter, which had previously tail number 637, had received registration LN-STF. It arrived in Norway on 15 June 1973 and was in use until March 1983.

90 types of aircraft and helicopters

Amdal has been fascinated by the F-104 Starfighter since he was a kid. He has built model airplanes and reading books. The aircraft was a major reason for Amdal to decide to become a jet pilot.

Ahead of the 40-minute flight are thousands of man hours, linked to both the owners of the association Starfighters's friends and Amdal himself. While enthusiasts of the Association have diligently worked for thirteen years to make the machine flyworthy again, Amdal has been with the team the last five years.

As test pilot he is among Norway's most experienced pilots and together he has flown more than 90 different aircraft and helicopters. He have flown the F-16 for many years and is currently involved in the development of the new fighter, the F-35, in the United States.

- I have been very lucky and have been allowed to fly a lot, both modern and old planes. On the test pilot school, which I went in 2008, I learned to be comfortable in an unfamiliar cockpit. It's also about learning philosophy and understanding of aircraft in general, he says.

To prepare to fly the Starfighter, Amdal had many conversations with pilots and technicians who have been closely involved in the operations of this aircraft. This way he was able to gather as much information as possible.

- At the same time it has been 33 years ago that the last aircraft were used in Norway, so there may be things remembered wrongly. Therefore I have been looking for evidence in the books, for both airplanes and books it explains precisely how it will be. It has been a combination of reading myself, listening to experiences and hear other pilots.

Amdal also spent a lot of time to visualize flight with the Starfighter.

- I have sat many hours by myself, inside and outside the cockpit with his eyes closed and got through checklists and stuff. I've tried to figure out how it would feel and for that reason simulated a trip from departure to landing.

Despite the Starfighters's accident history, test pilot Amdal was neither nervous or scared before the flight. He describes the condition he was in as "very tense and focused."

- It was a great honor to fly the Starfighter and the biggest fear was to "fuck up". The fear of life is secondary. It is quite strange how it works. I rely 100 hundred percent on the computer, the launch site and the work people have done. If not, I had not flown.

Was flying a Starfighter as expected?

- Mostly it was. There were some things I discovered along the way. That when you accelerate, the machine reverses in roll and the opposite when you decelerate. The Starfighter has Short Serpent wings and little mass to take a shift. Modern fighter aircraft, the F-16 and F-35, have computers that fixes it for you, so you do not notice it as much. But this is a proper manual machine.

Amdal says that one learns pretty fast when you are in the air in a machine you have not flown before.

- As I rotated in the air, the machine rolled slightly to the right. Then I had to correct, but I do not know exactly how much was required. I give a little aileron left, but then it turned out that this may be a bit much. Two clicks on the left side trim, made the difference. We knocked off,  and the F-16 barely could hang on.

The fact that Starfighters are not flown by computers implies that it needs more handling and you experience more shaking and hearing sounds than one does in modern day fighters. The landing must also have been very different than fighter pilots today are familiar with.

- I was extremely careful not to pull back the throttle. This is because the Starfighter has a special system that allows air blown over the flaps so that you can land even slower (Boundary Layer Control). If you land it in idle power the air disappears over the flaps and you have no additional lift anymore. Therefore, one cannot keep it idle, like used in other aircraft. One has to fly down until the wheels touch the ground before you can bring the throttle to idle.

Although the Starfighter is safely back in the hangar, Amdal had not landed yet in his mind.

- I have not dared to look at the pulse wrist watch I wore when I flew, he laughs., adding that the machine landed much nicer than expected.

- It was good to me. It's the great feeling when you know that the braking chute comes out and pulls you backwards. Then you know that you are where you should be. The landing took place without drama, and it was a fantastic feeling. I needed a minute for myself on the taxiway. When I went through "after landing checks," to be absolutely sure that I had done everything right, I taxied back, drenched in sweat, and finally parked the aircraft.

May be this summer's highlight

It was the first but certainly not the last, time Amdal flies the Starfighter.

- There are certainly several trips. We have a few little things we're going to fix and adjust. We are in continuous dialogue with the CAA, today we were there for two hours and debriefed. They have demonstrated considerable goodwill and judgment so we got to this, he says. - I reckon it will be two to three trips before we have finished testing program. When it gets depends on several things, perhaps in the autumn. Once we have taken these trips we can apply for permanent "permit two aircraft." Then we have to show off the machine to the people, he said.

The team behind the Starfighter has already received inquiries from a number of air shows abroad. But so far the aircraft has not been authorized (yet) to fly outside Norwegian airspace.

On the final question: “Does it mean that we can hope to see the Starfighter flying during the Norwegian air show next year?”, Amdal answers:

- Yes absolutely! It should clearly be possible.