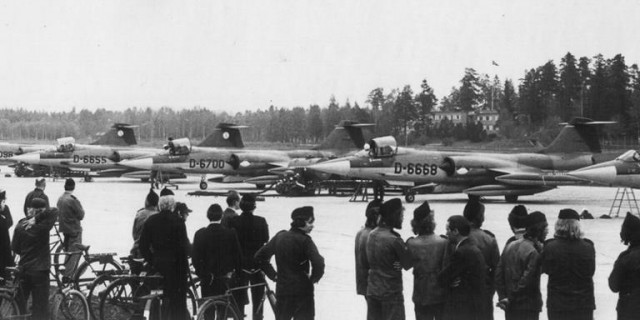 A special orientation and representation visit to Sweden was organized by Commodore Drost and likely related to the upcoming replacement of the F-104 Starfighter.
The Swedes offered their Saab Viggen as valid successor.
It was May 23rd, 1972 when six Starfighters landed at Nykoping AFB, East Sweden. Together with two extra pilots and 9 crewchiefs it became quite a delegation.
Nykoping was homebase of F11 equipped with recce version of the Saab Draken at that time.
Participating pilots were Sgt Maj Ton Kooijmans (312sq Volkel), Kiek Okkerman (306sq Volkel), Capt Gerrit Kooistra (312sq Volkel), Ton Helders, Sgt Maj Cees Koster (323sq Leeuwarden), Elt Guus Nieuwenhuis (322sq Leeuwarden) and Harm de Jong.  Sgt Maj Ton Kooijmans was sectionleader for this trip and Lt Col Visser responsible for the event.

The delegation was not allowed to fly any further in Sweden, except up and down from the Netherlands, above Swedish airspace escorted by Saab Draken aircraft.
Sadly there were no demonstration rides planned in one of the two-seater Viggens or Drakens but instead the delegation visited the impressive aircraft hangars build under ground inside the Swedish mountains.
These underground shelters were not located at the Airbase of Nykoping. It was an other Airbase (name unknown) located directly along the sea at the east coast.
The delegation also went by bus up and down to Stockholm in 1 day.  On an other day Commodore Droste visited the airbase for a formal part of the event which ended May 26th.
The runways at Nykoping were extreme short and narrow, not meeting the NATO standard requirements and it was quite challenging for the F-104 pilots.
Overall the team enjoyed the visit which was quite extraordinary. They also departed back home with the F-104's on May 26th.
Note: We all know that eventually the Dutch Air Force decided to select the F-16 aircraft in May 1975. to replace the F-104G from 1979.