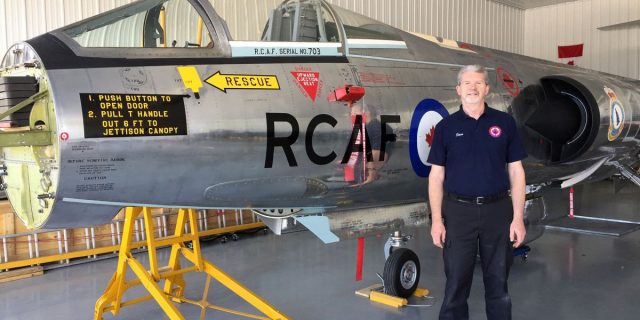 “The Canadian Starfighter Museum is dedicated to preserving the memory of the CF-104 Super Starfighter, its pilots, maintenance, and service personnel as well as all those who served on Air Bases where the aircraft were operated.”

So reads the museum website. But it has an even higher purpose.

“We’re trying to educate the public about Canada’s role in NATO during the Cold War and beyond,” says Steve Pajot, curator and operations manager of the museum, which is located in a private hangar at the St Andrews Airport, 25 kilometres north of Winnipeg, Manitoba. “We feel that people don’t understand that we were actually in a war and there were people killed, including pilots and other personnel.”

Pajot was interviewed during a tour of the museum on a hot prairie morning. He was with museum colleague and fellow volunteer, Russ Johnson. They and other volunteers are in the process of restoring an old CF-104 Starfighter that was flown by the Royal Canadian Air Force before being sold to the Danish military many years ago.

A CF-104 Starfighter is mounted on a pedestal outside the 17 Wing gate on Air Force Way. The Lockheed F-104 Starfighter was a single-engined supersonic interceptor aircraft that later became widely used as an attack aircraft. It was originally developed by Lockheed for the United States Air Force, but became widely used by U.S. allies around the world and was produced by several other NATO nations.

The Starfighter was operated by the air forces of more than a dozen nations from 1958 to 2004 and its design team was led by Kelly Johnson, who went on to lead or contribute to the development of the SR-71 Blackbird and other Lockheed aircraft. The F-104 set numerous world records, including both airspeed and altitude records, according to Wikipedia.

The Canadair CF-104 Starfighter was a modified version of the Lockheed F-104, built in Canada by Canadair under licence. It was used primarily as a ground attack aircraft, despite being designed as an interceptor, until it was replaced by the McDonnell Douglas CF-188 Hornet in the 1980s.

Those who flew and loved the aircraft called it the “Silver Sliver” or, most commonly, “the Zipper”, Pajot says. “There was an RCAF demonstration team for many years that called themselves the ‘Deadeye Zips’. The USAF always called the Starfighter the ‘Zipper’ because of its speed.”

“This is something I’ve wanted to do, because I remember it as a kid,” says Pajot, whose father was in the RCAF and who has been spellbound by Starfighters since his early youth. He recalls watching the slender, needle-nosed CF-104 Starfighters shoot down the runways during takeoffs at 4 Wing Baden-Soellingen, Germany and at CFB Cold Lake, Alberta

Pajot is a retired Air Canada mechanic. He and his older brother, Darryl, a retired RCAF CC-130 Hercules pilot, and their father, Phillip, built a 3.05-metre-long scale model Starfighter several years ago that is now on display at the National Air Force Museum at 8 Wing Trenton, Ontario.

The aircraft being restored was purchased in 2011 from a U.S. broker, a retired United States Air Force officer, says Pajot.

“It was shipped by sea container from Denmark and then by flatbed truck to the museum here,” he said.

Pajot says he spends at least eight hours a day four times a week working on the plane. “Right now, I’ve got to put the cockpit together. Working on this plane is my passion.”

The Orenda J79-OEL-7 is capable of 15,800 pounds of thrust with the afterburner. “This was a 1960s aircraft built for a nuclear strike,” says Pajot. “It could slice through high turbulence. What we’re trying to show is Canada’s involvement at the height of the Cold War in the 1960s.”

Thirty seven Canadian pilots lost their lives flying this aircraft, he observes. “I do not look at working on this aircraft as a hobby because once it is finished, there will be no hobby left,” Pajot emphasizes. “It is my passion. When the aircraft is done, I will not be restoring more of them, but rather will be concerned with running the Museum itself.”

The museum’s official opening will take place sometime in mid-2018, although visitors, by appointment, are welcome now. Visit the museum’s website at http://www.canadianstarfightermuseum.ca.

Thanks to Jeff Rankin-Lowe for his CF-104 12703 historical Information below :