Capt. Charles E “Chuck” Tofferi, one of a kind 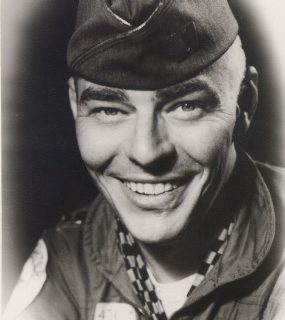 The F-104 Starfighter is without any doubt a wonderful piece of aeronautical design and in 1962 it proved to be a lethal weapon too during the annual William Tell exercise at Nellis AFB. Let's be clear about the fact that one person made that difference at that moment, a man with a talent to get everything out of this machine… Capt. Charles “Chuck” E. Tofferi. From that historical moment on his name is remembered by all who love the F-104 Starfighter. How dreadful and awful it is that he was killed four years later while flying this aircraft he always loved most.

Charles Ehnstrom Tofferi was born May 18th, 1933 in Fitchburg, Worcester County Massachusetts and when he grew up there he had one dream: to become a pilot.

As a 19 year old boy he enlisted in the Air Force on July 7th, 1952 and started pilot training. Two years later he graduated in Air Cadet Class 54-P at Reese AFB in Texas and started flying the twin-engine Convair T-29 at Harlingen AFB, Texas. In December that year (1954) he married Nancy Farrar, his childhood sweetheart, in the Harlingen AFB chapel.

After a few months flying the T-29 in Harlingen, he decided these aircraft were too slow and in 1955 requested fighter pilot training which he received at Perrin AFB, Sherman, Texas and Craig AFB, Selma, Alabama.  Following fighter training he and wife Nancy moved to Westover AFB, Chicopee,  Massachusetts.  As a member of the 337th Fighter Interceptor Squadron (Air Defense Command) he flew the F-86D and L radar mounted Sabre aircraft which were soon replaced by the F-104A Starfighter in February 1958.  Chuck flew the F-104 until the 337th disbanded in 1960 and the Starfighters were phased out at Westover.

In August 1960, Chuck transferred from the ADC to TAC (Tactical Air Command) joining the 479th Tactical Fighter Wing, George AFB, Victorville, California, to fly the F-104C Starfighter in a new role, as a fighter bomber aircraft.  Over the next few years he was a member of the 435th, 436th and 476th squadrons with the wing.  His great year was 1962 when he was chosen primary pilot and became Air Force Top Gun winning the Air Force World Wide Weapons Meet at Nellis AFB, Las Vegas, Nevada with 19,018 points flying F-104 57-914, scoring perfect scores in air-to-air gunnery (he destroyed the dart in only 63 seconds using 86 rounds); air-to-ground rocket, strafing and napalm attacks.  His statement to Lockheed after his win: “Thank you, one and all, for the best airplane I’ve ever flown.  The F-104 “really shines” in maintenance capability, so simple to maintain, people with little experience can do it.”

His statement to Lockheed after his win: “Thank you, one and all, for the best airplane I’ve ever flown.  The F-104 “really shines” in maintenance capability, so simple to maintain, people with little experience can do it.”

The William Tell 1962 video can be found here:
https://www.youtube.com/watch?v=otJzbcf0NQY&feature=em-upload_owner#action=share

One year later in September 1963, Chuck went to Langley AFB and flew the famous Hugh Downs, who was host of The Today Show on the NBC network; the clip was shown on the TV show.  Mr. Downs was very interested in flying and requested an F-104 ride and Chuck was chosen to do it.  Chuck was featured in the October 1963 issue of Popular Mechanics magazine, in which he is described as “the sharpest shooter in the Air Force.”  Articles featuring Chuck also appeared in Aerospace Safety, December 1962 and Airman Magazine, February 1963.

During his period with the 479th TFW, he had an 18-month exchange tour with the marines at Cherry Point MAS in North Carolina flying the A4C Skyhawk.  Chuck and Nancy really enjoyed life with the marines which also gave them the opportunity to become friends with an exchange couple from the RAF.  After returning to George AFB, Chuck deployed to Udorn AB Thailand with the 435th TFS under the command of the 8th Tactical Fighter Wing.

At Udorn all Starfighters flew in camouflage scheme, there he also flew a few missions inside his old William Tell aircraft 57-914 as he wrote in one of the letters to his wife.

Chuck immediately found out that their F-104s had a very tough mission in SEA.  On October 2nd, 1966, he flew a bombing mission with Capt. Norman Lockard and Norm had to bail out at 10,000 feet.  Lockard revealed afterwards, “Chuck Tofferi was lead that day, we flew many missions together. We rolled in high, dumped our nape. During the pull off we took 37 & 57mm fire. Chuck broke left, I broke right. The flack was right on us during the dive and “ The golden BB got me”. As I pushed up the throttle- nothing happened. At 80% power the F-104 flies like a brick! I went through a quick stall clearing procedure- no luck. I called Chuck telling him, “I’m hit, ejecting, check East of the target”.  I got out just above the stall at about 4,500ft. The chute opened fast and about pulled off my right leg. I had hung on to the ejection ring too long. I also noted my helmet was gone or at least not on my head. I looked up-good chute-I looked down-lot of green! But I was safe.
I called “In the blind” “ Chuck, I’m down O.K., any bad guys in the area? “ He came up right, “ No one but you. The choppers on the way, hang in there!” Good old Chuck! He held up high while I checked out the area and got ready for “ Jolly”. I called Chuck telling him I was heading for high ground, grass to the West to set up a better pick up site. About this time Chuck called to say he had to leave- choppers are ten minutes out! That was a long ten minutes.

On October 20th, 1966, Chuck again flew a mission with Norm Lockard and two other pilots.  Flying with callsign “Bango Bravo O,” while pulling up from 1,000 feet over The Plain of Jars, Laos, Chuck was hit by AAA fire in the aft fuselage which was fatal. The F-104 crashed instantly around 07:10 D time.  According to Norm, Chuck was #3 in a flight of four while Norm was #4.  Numbers 1, 2 and 4 had wing tip tanks and two napalms (one under each wing).  Chuck’s plane had wing tip tanks and two 750 pound bombs (one under each wing).  They all had fully loaded guns and none of the Zippers had ECM equipment at that time.  Also, there were no SAMs in their target area.   Norm strongly believes that Chuck had a possible stuck throttle because he never dropped his bombs after he called and said, "I've got the target."  Norm lost sight of Chuck for a moment as Norm went through a small cloud deck.  Coming out of the clouds Norm saw Chuck trying to pull out of his dive and he seemed to have cleared the area but bottomed out hitting the trees in level flight and of course exploding. This must have been the moment that the aircraft was hit by the Anti Air Artillary (AAA). Chuck did not have any chance to survive and was sadly killed instantly.

Capt. Tofferi is survived by his wife, Nancy (Farrar) Tofferi and his daughters, Susan Nadine and Senya Joanne, who were nine and six when they lost their father.

On January 19th 1970, his remains were buried at Forest Hill Cemetery, Fitchburg, Massachusetts, the city in which he grew up.

He also has a military marker in his memory at Arlington National Cemetery.
He is honored on the Vietnam Veterans Memorial, panel 11E, line 92.

Thanks to Nancy Tofferi and daughters Susan and Senya for all the provided information and to honor Capt. Charles E. "Chuck" Tofferi.