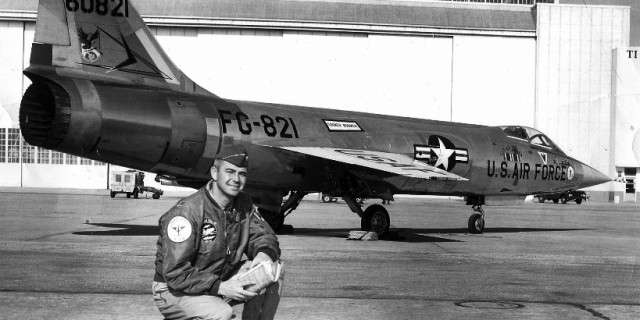 Last month we received a number of interesting F-104 photos showing aircraft from 331st FIS based at Webb AFB, Texas.
The photos were given by Samual Scott Fields, son of Samuel Henry Fields, an ex 331st FIS F-104 pilot who sadly passed away in 2010.
He would like to honor his dad by adding him to our IFS Member Pilot Gallery which we did today.
The photo shows him before his aircraft in 1963 at Webb.

This 331st FiS was flying the F-104A and B model from 14 April 1963 till 28 February 1967 for their interceptor task within the ADC.
The squadron was on deployment at Puerto Rico during the Dominican Republic crisis 0565.
Totally the unit used 23 F-104A's and 4 F-104B's. Most aircraft were transferred to the 4760CCTS at Webb officially on 280267.
First the aircraft flew from Webb AFB, Texas and lateron they moved to Homestead AFB, Florida.
Interesting to see are the yellow intake bands and cones as well as the colorful markings on their tails.
Photos beneath (click on them to open the bigger)