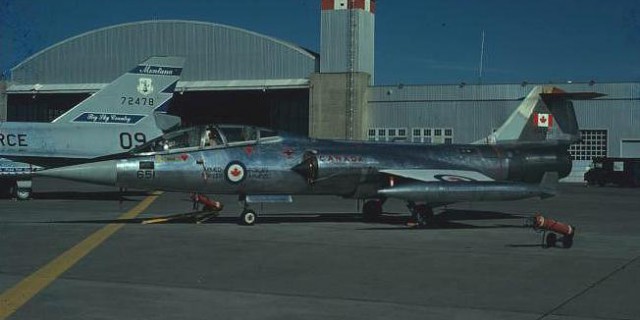 We just got a nice status update from Tom Hinderks of the Alberta Aviation Museum on the TF-104G D-5805 to CF-104D 104651 restoration project.
The 104 tail is now stripped to bare metal and the fuselage is in at the contractor having the same process completed.
Prior to being sent for stripping D5805's original markings and colours were photo documented in detail exterior and interior for our archives.
The cockpit is under refurbishment as are some minor repairs to the tip tanks...both being done by our volunteers.
Once the fuselage is back the tail will be installed and it will be polished.
While the polishing is being done the wings will be painted (white on top, gray on bottom), the horizontal tail will have some minor repairs done and
it will be painted (RCAF red top and bottom) and finally the tip tanks will be painted (RCAF red)
After final assembly the cockpit will be assembled and the markings installed.

Dutch Starfighter D5805 will have transformed to Canadian Armed Forces Starfighter 104651 as flown in 1980 at Cold Lake Alberta.
"651" was lost in 1980 during a low level strike training mission NE of Cold Lake. Several Pelicans were ingested at VERY low altitude and the crew had
to pop up and eject. The pilot in Command, Rick Wall, is hoping to join us for the roll out later this summer. (targeting July)
As part of the project a special exhibit is being created on the Starfighter. Showing it's Dutch service, the history of "651" and the story
of the Canadian Starfighters.
Rick Wall has donated several items for the exhibit when combined with others donated and some form our archives it should be a great exhibit.

A special thanks to all those that have sent information and photos, greatly appreciated and will be going into archives to preserve the history of this Starfighter.