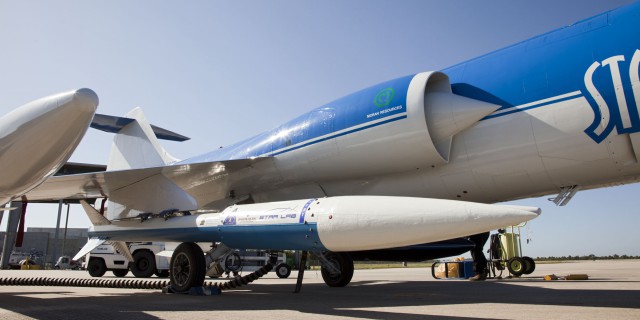 The Florida based Starfighters Inc. plans to use its growing fleet of F-104 fighter jets to launch payloads on suborbital flights from its base at the Kennedy Space Center. Under the plan, the Mach 2 jet would fly to an altitude of 60,000 feet and then fire off a 19-foot, 900-pound rocket with a payload attached, according to a NASA press release. The company has recently added five Starfighters to its fleet of four aircraft, which operate out of the Shuttle Landing Facility.

Starfighters owner and pilot Rick Svetkoff says there are plans to expand the company’s services to a broader group of developers, researchers and people. “We’re breaking the mold,” Svetkoff said recently inside the hangar at the SLF the company leased from Space Florida. In the last four years, the company has flown microgravity experiments, spacecraft parts and a digital camera to make sure it could withstand launch conditions.

For example, Space Florida and the Florida Space Grant Consortium have flown payloads using Starfighters. Researchers are developing projects using the F-104 to try out everything from space traffic control to human reactions to different physical conditions to launching satellites on quick trips into space. “There’s a lot of things that we can do out here,” said Eddie Ellegood, director of Aerospace Development and a space policy analyst at Embry-Riddle Aeronauical University in Daytona Beach, Fla.  Read more about this sub-orbital project at: http://www.parabolicarc.com/2011/05/31/starfighters-launch-nanosats-cape-canaveral/