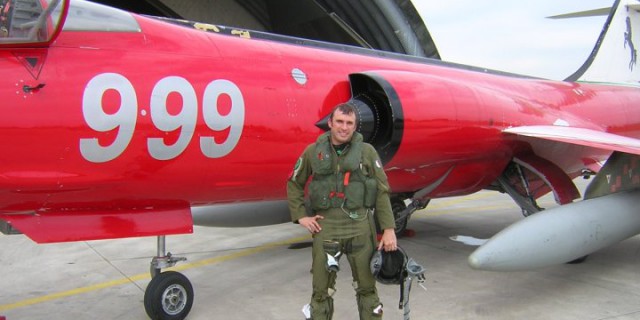 Piercarlo Ciacchi joined the Starfighters Inc. Team already in February 2013...as Director Flight Ops and Business Developer. As the Company message and Image changed a lot lately...he is now strongly pointing in the R&D direction with many new innovative programs and activities... Airshows will only be a very little portion (if any).
Of course we wish him lots of success!!!!!!

Members who have received our magazine frequently in the past, must remember the recordflight made by Piercarlo back in 2004.
ZIPPER Magazine nr 58:

On the 25th of March 2004, Ten. Piercarlo Ciacchi flew his last F-104 flight since he was scheduled to travel soon after to Arizona for an F-16 pilot training.
Everyone who knows Pierro very well knows that he is a real F-104 pilot and this last flight would be a very sad moment for him. Pierro decided that this flight had to be SPECIAL!!!.
And so, he decided to try to break the F-104 flight duration record (without in-air-refuelling) during this last flight. Groundcrew offered him a special aircraft for this special recordflight, the red 9-99!!!. Flying this MM6930 with 4 fueltanks maximum loaded he toke off from Grazzanise. The flight was long, and warm. Pierro had to drink a lot during the flight.
The result was that he managed to fly for 2 hours and 50 minutes before touchdown being the longest 104 flight ever, at least with an F-104S variant!!
Photo is added with this post.

It is quite understandable that Piercarlo is currently thinking about adding a special page about all the record flights flown by F-104s in the past. See also: http://www.starfighters.net/unmatched-safety-records/