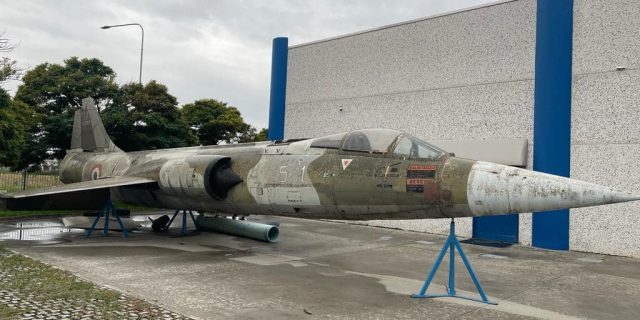 The F-104S-ASA Starfighter (c/n 1145) MM6845 "5-11", Italian Air Force, has been preserved for many years with Bentivoglio, Rome until it was sold to Robby Moto Engineering at Casalmaggiore-Cremonanear, Italy. The aircraft has the nose from MM6789 and the tail from MM6809. Recently we heard that it was taken away from its display position with the message that it was sold to the Institute of Materials for Electronics and Magnetism in Parma. The aircraft was seen in September 2022 for the last time with Robby Moto Engineering premises in storage outside. Likely the aircraft will be transported to Parma soon or even has already arrived there with the new owner. But for now it looks like it is still used for measurements as reported beneath!!!

Interesting is that this aircraft was used for specific measurements as Davide Bazzani revealed this month here:

Satellites launched by the F-104 - The new mission of Robby MotoThe company in the ambitious aerospace project of the Cnr.
The first tests have already been done in Florida

"CASALMAGGIORE - Many are wondering what an old F-104 Starfighter Lockheed jet has been doing for some time in the external area of ​​Robby Moto Engineering and the answer comes from the company's managing director Roberto Papetti: «On behalf of the National Research Center we are working on the design, simulation and construction of the pylon and release mechanism of an airborne launcher equipped with a hybrid propulsion engine, made by the Paduan space company T4i, for putting satellites or probes into orbit for scientific research into the atmosphere. We bought the aircraft because we need it to do our tests, such as calculating the measurements and evaluating live the conformation of the various parts on which we have to work".

The whole project was born from a concrete need: using the traditional launch pads of the rockets that bring telecommunications satellites into orbit is extremely expensive and the activity in question, moreover, can only be carried out in certain sites. In Europe, for example, such sites do not exist.

"This is why we are trying to air-drop, with the use of F-104s, single-engine high-performance and supersonic aircraft (capable of flying at 2,600 kilometers per hour, over Mach 2, ed.) of small carriers".

Basically, the idea is that the plane takes off with the "rocket" attached, to which the electronic devices are connected which must reach low earth orbits, defined as "Leo", at an altitude of between 300 and 1,000 kilometers.

Once it has reached a certain altitude, around 50,000 feet, the carrier will be undocked from the aircraft and switched on to reach low Earth orbits, known as "Leo", at an altitude of between 300 and 1,000 kilometres. The aircraft, however, will then turn around and return to the ground. A series of operations that must be performed perfectly in order to manage a launch from altitudes that allow to overcome the densest layers of the atmosphere and therefore more expensive for a carrier. Here is the advantage of using a jet.

The project team of the Casale-based company is made up of Papetti, technical director and CEO, aeronautical engineer Luca Ferrari, electronic engineer Mattia Durantini, mechanical engineers Luca Narcisi and Filippo Marino, and energy engineer Federico Pessah. High skills that intertwine and link together towards a single goal, which is estimated to be achieved in 2024.

Initially - explains Papetti, supported by his sister Mirca, who leads the company with him - the project was followed by the Air Force, but subsequently the CNR preferred to involve private companies as well. Why exactly with us? For a series of coincidences. I have a friend who flies the F-104: his name is Piercarlo Ciacchi, from Trieste, a former pilot of the Frecce Tricolori, now residing in Florida where he runs a piloting school.

Ciacchi himself was involved by the Starfighter company, which has seven F-104 aircraft (decommissioned for military use since 2004), four of which are flying and at Cape Canaveral carries out operations of various types for NASA. The Cnr contacted the Starfighter which involved Ciacchi and in November 2021 the assignment of the mechanical part, with engineering and aerodynamic analysis, but also of flight management with data acquisition, to the Casalmaggiore company.

The first tests at Cape Canaveral were carried out in July and I too got on an F-104 piloted by Ciacchi». If all goes in the right direction, the system will allow the placing into orbit of CubeSats, a type of miniaturized satellite (with an average size of 10x10x10 centimetres). More tests, more flights, more simulations will be needed, but much of the work has already started. Through the installation of cameras, the team manages to acquire useful information to perfect the most efficient mechanisms for coupling and uncoupling the rocket."

Picture thanks to Guido Trolese