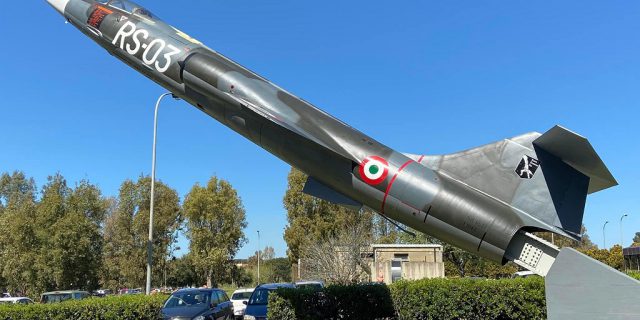 The Italian F-104G MM6527 was withdrawn from use in 1992 at Grosseto serving 20 Gruppo with code 4-51. Lateron, after demilitarization, it was transported to Pratica di Mare to become a monument on a pole near the officers mess. It was restored and repainted into a Pratica test aircraft with code RS-03 and installed late ninetees. In between the paint has been destroyed due to weather conditions and it became clear something had to be done to safe the aircraft. It was removed from the pole around 2021 and this month it was seen again on the pole in a very good condition. The paint and markings are very accurate and representing the correct layout as used during the 70s and 80s at Pratica. A job well done!!
Picture was taken a few days ago by Riccardo Niccoli.

Beneath a picture of the aircraft taken back in June 2014 showing the aircraft in a worn state, taken by Antonio Rossi.