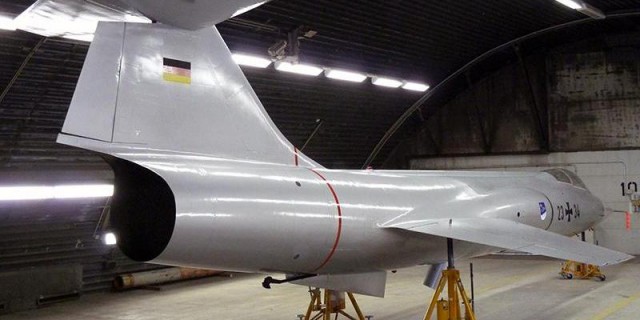 The F-104G 24+17 with fake serial "23+34" was taken from its pole at the old Memmingen Air Base on May 16th, 2011. Afterwards it was put on storage and received some repair work. It also has been refurbished completely including the fake serial "23+34" serial, and is ready to be mounted again at its brandnew location, being the 80 meter roundabout currently established on the North side near the new Memmingen airport. This is after the exit from the highway A96 (Lindau-Munich). Nothing is official yet, but these are the current plans.
We do not know when it will be erected there but we suspect before the end of this year, maybe soon.

We have some mixed feelings about the colors applied to the aircraft but this silver grey has to prevent
to give it too much military appearance at a civil airport. Photo thanks to http://www.focus-starfighter.de (Memmingen Starfighter group)