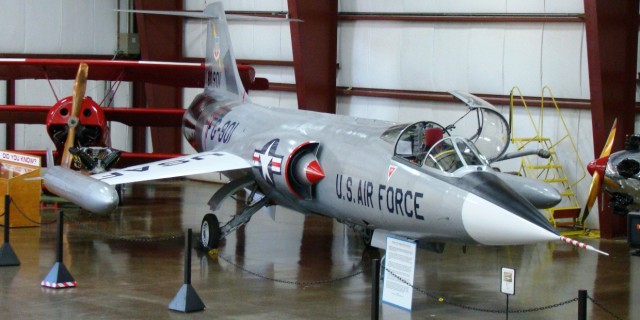 We received some latest news from Harry Newman of the museum team, regarding the status on F-104C 56-901. He stated:

"901" has been completed and is now on permanent display in our military hanger. Against all odds she survived the scrap heap, a tornado which flipped her over, and 30 years of outside storage in our brutal New England weather. It has been a thrill to bring her back to display condition. We used the paint scheme from the time of the 1962 record breaking "Kite Intercept" mission that "Sharkbait" Delashaw flew. Of course, during the record flight 901 didn't have the refueling boom or the tip tanks, but they looked so cool we couldn't help ourselves. People might ask why the dark panel on the tail.

Photos from the "Kite Intercept" clearly show this panel being dark so we went with it. The tip "tanks" are mock-ups since the early level C tanks were not to be found. We used seven F-15 storage pods to make them and they are within an inch of the real tank circumference. A few weeks ago we opened 901 to the public so kids (and adults) could actually sit in the restored cockpit and we have a sophisticated flight simulator set up so people can "fly" a 104. I am planning to make an adjacent display focusing on the "Kite Intercept" mission.