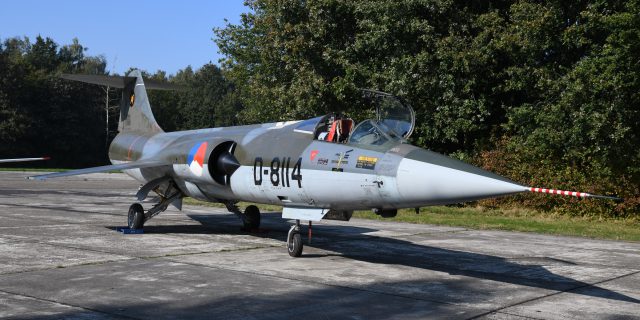 The Dutch Starfighter Foundation (DSF) and Historical Fighters Volkel (HVV) team held a special meet and greet with their sponsors and their fans, focused on their wonderful F-104G D-8114.
It was a beautiful day, during which lots of F-104 minded people, including some ex-Starfighter pilots and their wives, enjoyed the warm and open atmosphere.

Due to the wonderful weather the team decided to roll the F-104 outside, giving everyone the opportunity to make brilliant pictures of this star of the show. In the afternoon the Chairman of the DSF, famous former Royal Netherlands Air Force F-104 demonstration pilot Hans van der Werf, gave a status update on the project, aimed at bringing the D-8114 back into the same condition as she was in immediately after her last flight. The DSF is a civilian foundation that supports the HVV financially. The HVV is a military organisation, made-up solely out of volunteers, many of which are ex-RNLAF personnel. All four DSF-members are also active within the HVV organisation. Visit the interesting DSF website HERE.
Hans explained how difficult the project was and how the team is determined to never give up. After arriving at Volkel in April 2012, more than 9 years later D-8114 is now 100% ready to receive its engine. We all know that the Canadian company S&S Turbine Ltd. offered a completely revised and tested engine, certified for 400 running hours, for the project. After the tests in Canada, the team started the incredible difficult process to get the engine to the Netherlands, meeting all the existing laws and regulations. There have been many ups and downs but slowly the project is moving into the right direction, with a lot of patience and dedication.

During the wonderful event, which felt like a reunion, (ex F-104 pilot) Hans Ruijgrok, Head of the HVV, was honoured for his 10 years of dedication to the HVV and received an impressive artwork by Peter van Stigt, showing D-8283 of 311 sqn, the aircraft from which he had to eject on December 17th, 1974 in Belgium after an engine failure. Without both Hans’s and all other volunteers, the project would long since have grinded to a hold. Yet, they are still pushing!

A small video showing the D-8114 being rolled out of the hangar can be found on our youtube channel HERE.

Looking forward to the next event!!