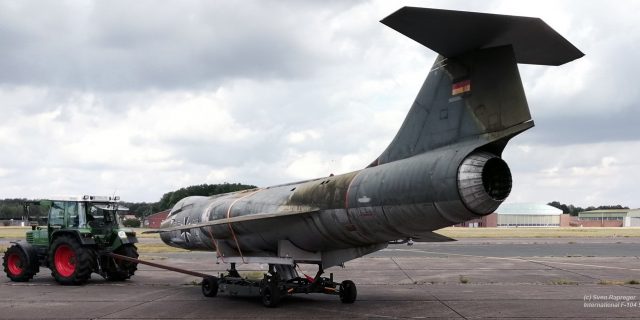 As mentioned last year there were plans to take down old Starfighter DF+101 from its pole at Bentlage for a good restoration.

However it was impossible to arrange a good crane so the restoration team but in August 2019 the moment was there, the DF+101 was taken down and transported to an old hangar at Bentlage.

Inside this hangar the team has room enough to give the Starfighter the treatment it deserves.

Sadly it is still unknown what will happen to the aircraft but we hope it will be put back on a pole at or near the airbase in the near future.

This particular Starfighter has a big history. It was build with MBB in Germany with c/n 7140 in 1964 it first flew with JBG34 as DD+241 and in January 1966 it moved to Norvenich becoming DA+254. It stayed with JBG31 when it received code 22+59 until it was withdrawn from use in 1983 (shortly used by LWS11). In August 1985 it became the gateguard at the General Wever Kazerne at Rheine and since November 2006 it moved to a pole at Bentlage after a refurbishment. ​

We will keep you updated on the progress!

Photos thanks to Sven Rapreger and information thanks to Hubert Peitzmeier.