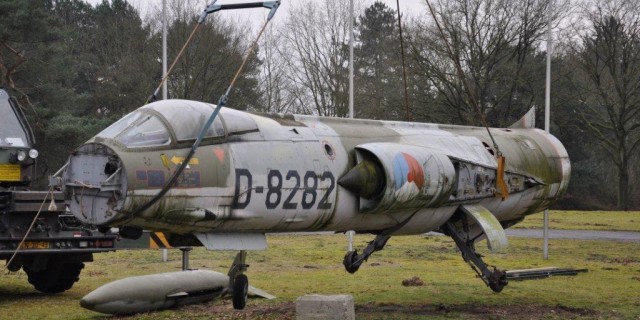 At the military barracks at Budel the ex Dutch Air Force F-104G D-8282 could be found for many years, preserved on a field.

Now the barracks are closed we were wondering what will happen to this aircraft which had already been treated bad by the Dutch weather. Some believed it would be taken away and scrapped by the Air Force.
Today we got the surprising news that the aircraft will go to Spain. It has been dismantled today and transported to Woensdrecht Air Base.
At this base it will be temporary stored and soon after brought over the Spain (maybe by Spanish air transport).

It is stated that the aircraft will be added to the collection of the Spanish Air Force historic flight and for that reason it looks like this aircraft was choosen in stead of a real ex Spanish Air Force Starfighter which that group was planning to arrange in Greece.
We will see what happens. At least one more Dutch Starfighter has been saved from scrapping.

(Photos and information thanks to Rob Dragt, Budel, 19 February 2014)