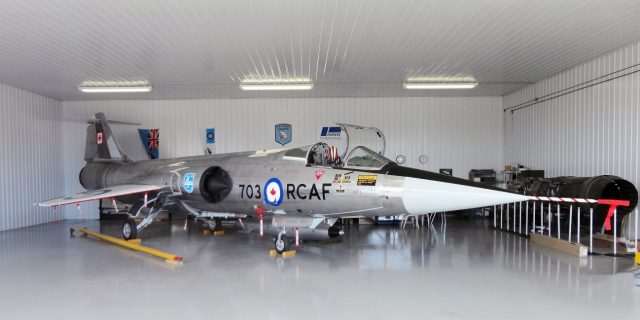 The Canadian Starfighter Museum is pleased to announce the completion of RCAF CF-104 Starfighter #12703 on June 30, 2018.
The aircraft will be "Rolled Out" at a grand ceremony at the museum hangar in St. Andrews Airport, Manitoba, CANADA on July 12, 2018 to coincide with the original "Roll Out" at the Canadair Ltd. Plant in Cartierville, Quebec, CANADA on July 12, 1961.
CF-104 #12703 is the centre piece and crown jewel of the Canadian Starfighter Museum which is dedicated to educating the public about Canada's involvement with NATO and its role in helping to maintain world peace during the Cold War Era. Another photo can be found beneath (click on it to enlarge).

More information can be found on the museum website: http://www.canadianstarfightermuseum.ca/