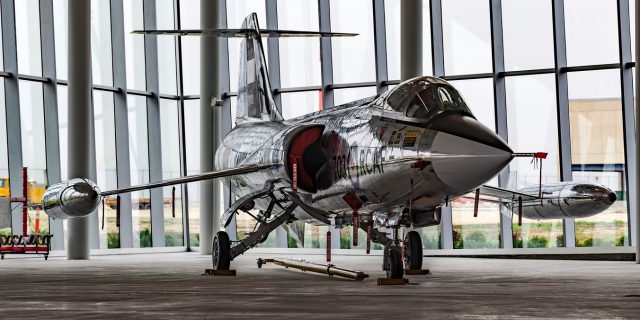 The Royal Aviation Museum of Western Canada officially  announced in June this year that it will display our CF-104 Starfighter #12703 at its new facilities.
Although the Canadian Starfighter Museum has lost its hangar facilities at St. Andrews Airport in Manitoba they will still be available to speak with visitors at the RAMWC now the aircraft is on display there. The CF-104 is on loan to the RAMWC and will now be more accessible to the public and in a  more modern facility which will be one of the premier museums within Canada. The biggest change is that the CF-104 has a new home in the City of Winnipeg at the Winnipeg James Armstrong Richardson International Airport. The RCAF CF-104 story will continue to be told. This website will continue just as the Canadian Starfighter Museum will continue. The CSM operations at St. Andrews Airport ceased on August 15th to prepare for the move of the aircraft.
On October 6, 2021 this CF-104 Starfighter 703 arrived at the Royal Aviation Museum of Western Canada (RAMWC) in Winnipeg.
As mentioned before this aircraft was immaculately restored by Steve Pajot and his team at the Canadian Starfighter Museum at the St. Andrews airport north of Winnipeg. It was trucked into Winnipeg and towed into the RAMWC today.