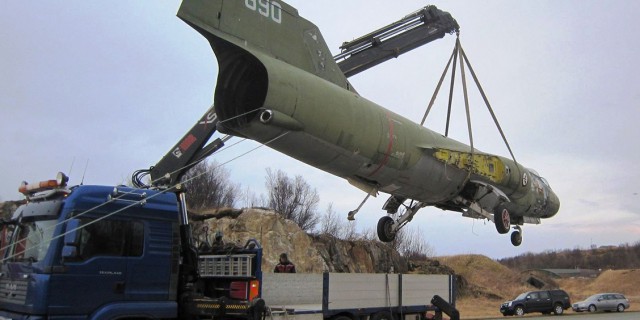 After this has been ended the remains of the aircraft will be scrapped.

A tragic end of an aircraft which surprised us all around 2007/2008 when it was used for a movie as U2 aircraft, receiving a U2 nose radome, looking quite odd.

Tom Svendsen : There are three locations candidates according the company homepage (where the Starfighters may be located):
http://nammo.com/Locations/Norway1/Raufoss/
Nammo Raufoss HQ is at Enggata37 ,Raufoss
Nammo Raufoss industrial site  Fabrikkvegen 11 ,Raufoss
Bradalsmyra Test Center , Raufoss , Circa 9 km sw from the industrial site.

Photos of this 890 transport were taken today at Bodo, thanks to Helge Andreassen.

Short note from Tom Svendsen:
In the past two RF-5A , 101 and 110 arrived at Raufoss , Bradalsmyra in 1987 and were scrapped at Hunndalen in 1994. (101 cockpit exists at Vik)
Many F-86K were at Bradalsmyra also for amunition testing from 1967. The last ones scrapped at Hunndalen in 2005.
No other aircraft were there between 2005-2014 as far as I know.
So based on that I think the Starfighters may stay at Bradalsmyra location and they may stay there for many years.
After that they will be moved by semi trailer and scrapped at (nearby situated) Metallco, in Hunndalen, Norway.