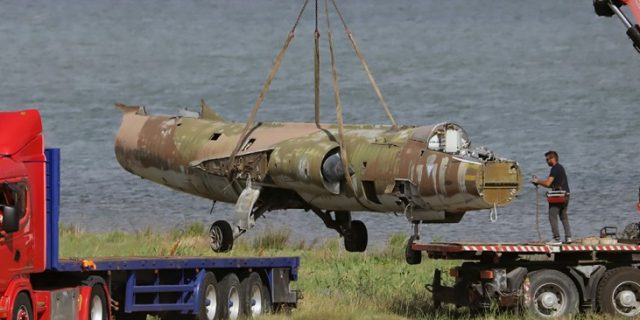 Recently we found out that F-104G 6680 left Corfu airport in May this year. The aircraft, or actually its fuselage only, was seen being transported from its old location to a private property, 16 Km North of the town Kato Agios Markos also on the island of Corfu.
The new owner is planning to restore the aircraft but this will be a big challenge looking at the bad shape of the fuselage, the various missing parts as well as missing wings, tail, canopy and nose. Also the fuselage is an empty shell without anything inside the cockpit section as well.
Nevertheless we hope he will succeed of course to get the aircraft complete again. We will keep you all updated for any new information in the future.

F-104G 6680 started its life In May 1965 as FIAT Italy license built aircraft, delivered to the Royal Netherlands Air Force under the US Military Assistance Program on September 24th, 1965. In the Netherlands it served training squadron The Dutch Masters at Twenthe Air Base until it was transferred to the 322/323 interceptor squadron pool at Leeuwarden Air Base on October 9th, 1968.
In 1974 the aircraft was delivered to 311 squadron at Volkel Air Base on loan. It stayed with 311 squadron after it was modified to Fighter Bomber version during IRAN in 1975 and official delivery autumn 1975. It stayed with 311 squadron until it was withdrawn from use due to the F-16 replacement. The aircraft was officially handed over back to the USA (Military Assistance Program contract) where it was decided to transfer it to the Hellenic Air Force. So on July 27th, 1982 the aircraft departed from Volkel to its new home at Araxos, Greece wearing Greek markings. In Greece the aircraft got the standard adopted Vietnam camouflage scheme and buzz code FG-680 and served 116th Wing until its retirement 7 years later in 1989. The aircraft was put in storage at the Athene Air Force storage premises for another 10 year.
Early 2000s the aircraft was suddenly seen as fire practice airframe at Corfu Airport, Greece where it stayed until it was captured by its new owner in May this year.

Photos by Spyros Molinari (thanks to Ioannis Mylonas), and Helmut Baumann (Volkel Air Base 1976).