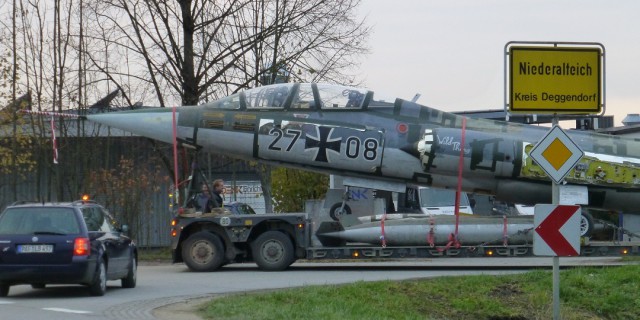 This Starfighter was promised already 9 years ago but had to wait for a generic USA weapon embargo regulation. But gladly now it can be prepared for future display inside the museum which will get a special extension stage build for it.
The TF-104G 27+08 (werknr 5709) never flew with this serial. After delivery to the Luftwaffe (by Lockheed) it was assigned to WaffenSchule 10 becoming BB+108. It flew until May 2nd 1966 when it encountered an accident. It was decided to transfer the aircraft as instructional airframe (389 flight hours) and so it became an instructional airframe at Kaufbeuren (Technische Schule Luftwaffe 1) receiving serial BF+110 and lateron operational serial 27+08. Mid 80s it was moved to the Technische Schule Luftwaffe 3 at Fassberg wearing JBG33 markings. The aircraft was still 100% operational by that time. In 1997/1998 it was withdrawn from use and received BDR code C059 and stayed at Fassberg at least till mid 2006. That year it was transported to Manching for demilitarisation and went in storage without wings. The aircraft was promised to be handed over to the Gerhard Neumann Museum at Niederalteich but had to wait for green lights due to a weapon embargo by the US. Gladly now the aircraft arrived !!
(Photo : thanks to museum owner Josef Voggenreiter)

More information about the museum can be found here: http://www.f-104.de/