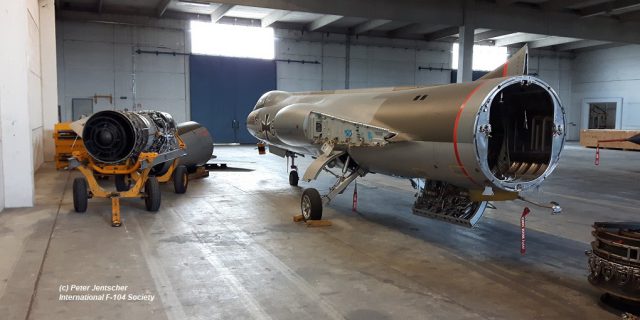 F-104G 24+86 (werknr 8217) has left Erding on June 30th and transported to Manching.
This aircraft could be found at Erding after it arrived in 1975, and became an instructional airframe with LWWerft11. It has been used there in this role until it phased out in 2013 becoming a "Mobile Display Aircraft".  In this role it was constantly located inside a shelter at Erding. Because Erding will close around 2023/24 a cleaning proces has started and the F-104G, together with 2 Tornado aircraft have been transferred to the Militärgeschichtliche Sammlung Manching (MGSM), a historical collection of the Waffensystemunterstützungszentrum 1 at Manching ( former Luftwaffeninstandhaltungsregiment 1).

Photos with this news article have been shared by Peter Jentscher, Waffensystemunterstützungszentrums 1 Manching.