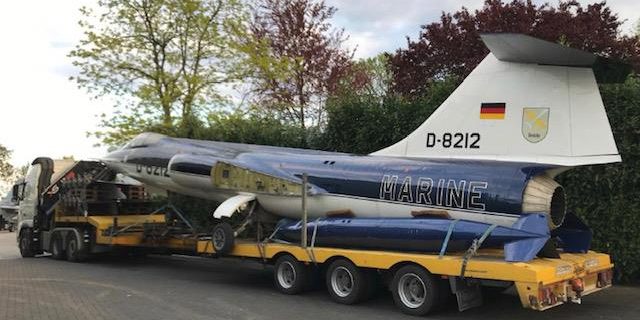 The F-104G (c/n 8212) 24+63, ex German Air Force, is returning back to Germany. Initially as a true interceptor it flew with JG74 at Neuburg from May 1964 as JD+104 and lateron as 24+63. It was withdrawn from use as surplus aircraft in July 1974 with 1537 flying hours logged. It became a decoy at Norvenich in January 1977 and got fake code DA+04, In April 1981 it was transported to the WWDBW at Munster for fire-practice airframe. Late 1998 the aircraft was suddenly found with a German collector in Remscheid, Germany, showing the aircraft in quite a good shape and having a new tail (c/n 8226) mounted. It was bought by PS Aero, Netherlands and transported to Baarlo, Netherlands in January 1999. From that moment a big restauration started inside one of the buildings at the Baarlo location until April 2000 when the company started respraying the aircraft. It got a Blue-White colorscheme with Dutch Air Force serial "D-8212" and was mounted on a pole at the entrance along the main road. TIt left for a new German owner on April 27th, 2019. Exact new location unknown for the moment. Early 2016 the aircraft was seen stored somewhere else along a building wall. Then suddenly the aircraft was seen leaving PS Aero for transport to a new German owner on April 27th 2019. PS Aero could only state that the aircraft would go to Germany but could not tell the exact location. A day later the aircraft was seen near Winterberg, Germany heading East. Hopefully we will find out more in the future.
Note: It is interesting to see that the aircraft got MARINE markings applied on its aft section prior departure, so it looks like this might have been a desire of the new owner.