24+11 cockpit moved back to Büchel 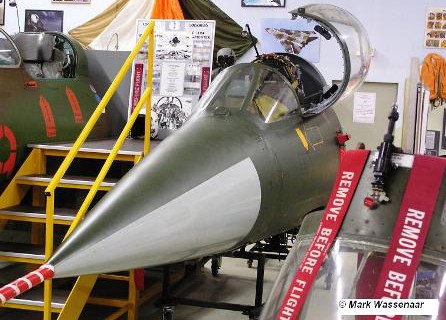 (By Hubert Peitzmeier)
This forward fuselage with cockpit (from F-104G serial 24+11 (c/n 8151)) was found inside Museum Flugsicherheit und Rettung e.V. located at Baden Airpark till 2012 when this museum was closed. The cockpit can now be found at the HQ building of the TaktLwG 33 Buchel (former JaboG 33) in the “Brauheck” barracks at Cochem-Brauheck, renamed: Taktisches Luftwaffengeschwader 33 (TaktLwG 33) Tactical Air Force Wing 33, effective 01. October 2013 and part of the Wehrgeschichtliche Sammlung of TaktLwG 33.

This cockpit was cut from the main fuselage back in August 2002 and became a demonstration cockpit at Buchel until they decided to donate this on loan to the Museum in Baden where it arrived 29 April 2008. It is sad to see that this museum is closed now.

The photo shows the cockpit when it was still at Baden on 4 February 2010. (by Mark Wassenaar)