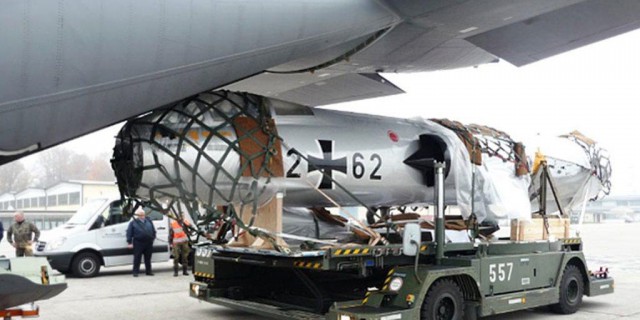 As mentioned earlier the ex German F-104G 22+62 was refurbished to become the new gateguard at Beja Air Base replacing the heavily corroded old German Starfighter "20+99".
The 22+62 had been removed from its pole at Furstenfeldbruck on July 21st this year and transported to Erding. A team started the restoration on this Airbase and late November the job was finished. The aircraft got a complete silver grey liverage and its original serial “22+62”.
Early December the aircraft was flown over by two Portugese Air Force C-130 aircraft from the airport of Penzing. The mainfuselage was flown over on December 3rd and the second C-130 took the rest (the wings etc).
At Beja the aircraft is now being assembled again and we expect it will be soon mounted on the pole. The old gateguard “20+99” will most likely be scrapped by a local scrapyard in Portugal.