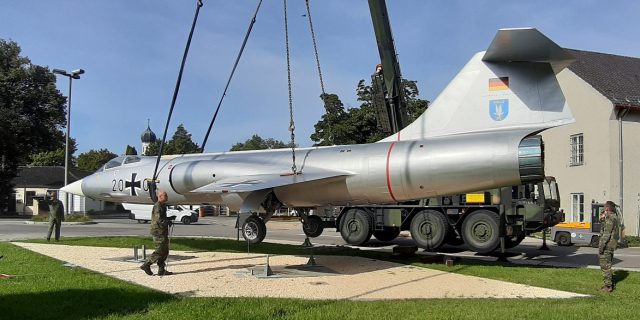 Today at Kaufbeuren (Technische Schule Luftwaffe 1) the F-104G Starfighter 20+06 (c/n 2006) can be found again preserved opposite the commander building.
It has been restored completely and installed again on September 21st. 2021.
News thanks to Renate Meier inside Algauer Zeitung (read more here).

It was, so to speak, the landmark of the Kaufbeuren air base for ten years, then the F-104G with the serial number 2006 was no longer nice to look at and was brought over into the hangar. Captain Marco Westphal extensively restored it there. Now the decommissioned fighter jet is back in its usual place - the almost 18-meter-long diamond-shaped exhibition area.

When Colonel Martin Langer Westphal asked over a year ago whether he dared undertake such a task, the hobby military historian immediately answered yes. “I was immediately hooked on this assignment. For me it was a great project and at the same time an honor, ”said Westphal. But the first challenges were soon encountered: The lettering on the old machine was made with a paint that was harmful to health. After thorough research, an environmentally friendly anti-graffiti gel was found. When it was erected in 2010, the crane's lifting gear had also destroyed the two rear wing connection plates. Captain Mathias Tietje arranged for these rare pieces to be procured. Metalworker Benedikt Netzer adapted these and expertly riveted them.
Westphal carried out the entire restoration in two phases. First, it was stripped of its paint and sanded. However, the machine was pretty badly corroded. With the help of two brush grinding machines the old plane they succeeded in the job. It was then given its new look by means of several layers of silver primer and lacquer, which had to be applied sheet by sheet as a masking tape and which should last for at least ten to 15 years. A total of 30 kilos of primer and 40 kilos of paint as well as 300 meters of masking paper were used.
Meanwhile, Thomas Röschmann from the Luftwaffe's teaching material workshops in Fürstenfeldbruck took care of the stickering. In addition, the extremely hard acrylic glass of the cockpit roof had to be ground and polished, as strong external and internal weathering had affected it for many years.

The hard work and costs of 6,000 euros paid off in the end: Staff Sergeant Marcus Wirsen moved the Starfighter with a tug from Hall 423 in front of Building 1. There, soldiers from Mountain Supply Battalion 8 from Füssen positioned the plane precisely with the help of a heavy-duty crane. After three hours, the work was successfully completed witnessed by many spectators.

The Lockheed F-104 "Starfighter" 2006 was delivered directly from the USA to Kaufbeuren. It was never flown in Germany, but served the Air Force School as an instructional air-frame since April 28th, 1961 (coded BF-010). Since 2010, the fighter jet has belonged to the Military History Museum Berlin-Gatow, which gave it to the Kaufbeuren Air Base as an exhibit in front of the headquarters building. Ten years later the machine had to be restored. Now it look wonderful again. 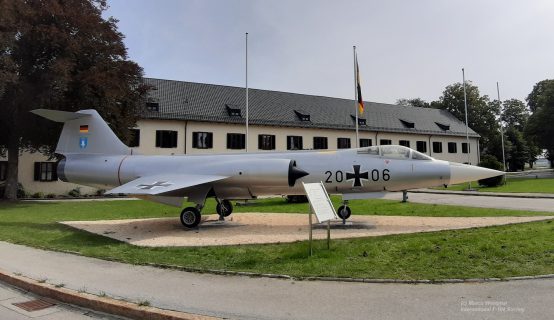