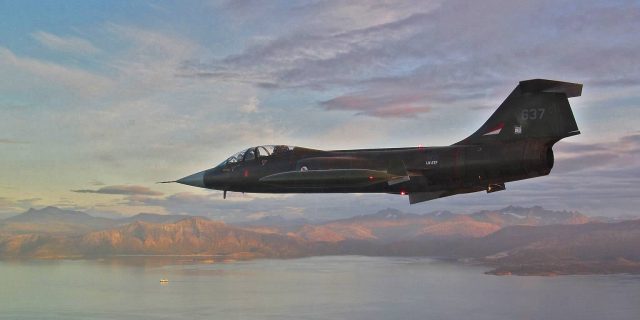 Built in 1963 for the Canadian Armed Forces it was transferred to the Norwegian Air Force 10 years later in 1973 and 10 years after that it flew its last mission on April 1st 1983.
All Starfighters were withdrawn from use, replaced by F-16s and put aside, being scrapped, put preserved on poles or send to museums.
Years ago the remaining CF-104D 104637 became the teddybear of a lot of old F-104 related retired and enthusiast personell at Bodo Air Base.

A plan was made to see if this bird could become airborne again which was of course not an easy job as we have seen the last years.
On September 10th, 2007 the engine first ran again (succesful) and the first afterburner test was on October 12th that year.
After lots of work to the airframe, seats etc. and the enormeous courage, endurance and professional attitude of the team the result was a successful first flight of the CF-104D 104637 yesterday at the end of the afternoon. It was flown by Norwegian testpilot Eskil Amdal who really made history.
The aircraft flew about 50 minutes and was escorted by a Norwegian Air Force F-16B (with Helge Andreassen in the backseat).

And taken by Helge Andreassen during the flight : https://www.youtube.com/watch?v=TdMioGFmUqM

Beneath some photos provided by the team (starfighter.no) and as banner a wonderful photo of the Starfighter taken by Helge Andreassen from the F-16.