Unidentified Starfighters, possible secrets and other mysteries around the F-104 Starfighters can be found in this section. Something to add or something to solve??? Don't hesitate to contact us!!!

The biggest F-104 Starfighter mystery is without any doubt the mystery around the identity of Taiwanese F-104J nr "4520".
It crashed during its delivery flight to CCK on 14 May 1987, after being assembled at Pingtung. Pilot Lo Ji Hsun ejected safely.
The aircraft came down inPu Yen Village, Zhang Hua County. The cause of this accident was a flame-out.
The aircraft had just been obtained from Japan and meant for nr 7 TFS at CCK AFB.

Since the aircraft was lost after re-assembly and subsequent delivery to the Taiwanese Air Force nobody saw the identity of this aircraft.
Except that it was nr "4520". Analysing the various lists, photos and reports there are only 2 main candidates left as most likely identity.
These are aircraft 36-8525 and 36-8555. Beneath photos of both candidates (click on them to see them larger)

Within a collection of Starfighter color slides Hans Koning detected a very interesting shot of an instructional airframe taken somewhere in Turkey
It was taken on a unknown date. Beneath a scan of this slide showing the aircraft which cannot be identified by any serial or other markings.
Who knows which F-104G this is and where it was taken? (click on it to see it larger) 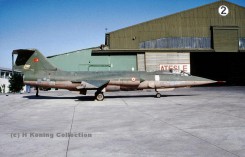 Currently a bare-metal F-104 Starfighter can be found near a factory at Niederalteich, Southern Germany.
It is part of the large "Gerhard Neumann Museum" collection and waiting to be prepared for display.
About this particular aircraft very little is known.
It was first noted ealry 70s when it was in use for Air Fatique Testing with the IABG (Industrie Anlagen Betriebs Gesellschaft
= institute for air-combat-simulation) at Ottobrunn, Germany.
In 1975 it was used for testing the CCV adjustments and structural analysis before the CCV project (MBB) converted aircraft 23+91 for flight testing.
After these analysis activities this airframe was shipped to MTU at Munchen for display purposes. This was around 1979.
At MTU it was noticed preserved for the first time in 1980.
It stayed at Munchen for a lot of years and it was taken of the pole on 7 April 2006 to be replaced by a more modern fighter aircraft.
The F-104 aircraft was donated to the Gerhard Neumann museum where it arrived in storage later in April 2006.

Some people believe that it is a composite of surplus Messerschmitt parts..
Others believe it is c/n 2052 but that aircraft has been lost in an accident and was totally destroyed.
Until now we do not have any serious idea which aircraft this really is.

Mr Rolf Neunaber (Ressort Manager Aerospace Structure) of the IABG at Ottobrun stated:
"The silver Starfighter was one of the test cells that never flew but only hase been used for crack and load testing at the IABG in Ottobrunn.
For that reason this Starfighter never had a GAF painting or something like this or even a GAF number.
Provided that the aircraft in question is the IABG fatigue test cell the a/c number should be S/N 7210.
The aircraft components are taken from the serial production line.
However, the a/c wings are changed several times and I assume they are different to the original standard.
More details may be available at EADS (former MBB)".

Beneath some photos / close ups of the aircraft (click to enlarge). First photo shows the aircraft preserved at the MTU facility in July 1997.
Other photos were taken at Niederalteich during a visit in June 2008 and show some specific details. (click on them to enlarge them)

The German fake 27+44
The photo beneath (thanks to Frank Mattes) shows an F-104G body, taken at Jever AB after 1994. We still do not know the identity of this aircraft and where it can be found today.
The 27+44 looks like 2744 which is the old postal code of Aurich. Only the main body is shown and in the background clearly the 2nd Staffel buildings at Jever can be recognized.
Staffel markings on this building indicate that the photo was taken at least after 1994.Is there anyone who knows more about this aircraft? Please send us an email......thanks! 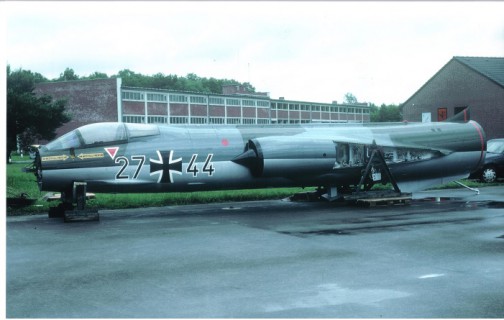 Some people believe the F-104 has been deployed to Da Nang also prior their official deployment in 1965. This could have been kept secret to assure the Vietnamese wouldn't know and the MIGs would be surprized or have been as some kind of spare squadron, for just in case anything would escalate.
Anyhow we have no records (mishaps, maintenance cards etc) which confirm this possible scenario.
We got an email from a Fire fighter who served at George AFB from Sept 1964 to late 1965 and then went to Kadena AB Okinawa.
"F-104 left George AFB in Oct 1964 for DaNang, I was stationed at George AFB at the time when the C-124 came in and took the fire truck and went to DaNang, Check with other USAF Fireman from there at the time who went to NV in OCT 1964. If I recall right it was the 28 of OCT 1964. Check the TDY orders. If I recall right they got rerouted to VN once they left Hickham AFB. When the F104 came home from the TDY we were told they lost 4 F-104 trying to support the ground troop. but were to fast to do that job so where sent back to George AFB in early Jan 1965" .

Can somebody confirm this story with more details?

Around late 70s and within the 80s a number of F-104A Starfighters were seen at Mojave Apt after these were withdrawn from use and sold to private means (out of MASDC storage).
There are rumors about which aircraft was seen and when and also where these aircraft went.
The analysis will start soon here: