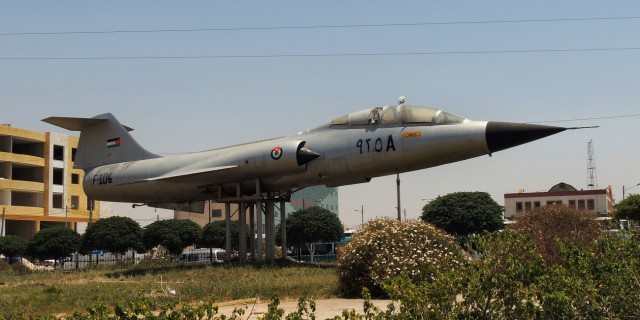 Someone we know from www.thai-aviation.net is working in Jordan this summer and made a trip along a lot of wrecks and relics all over the country.
He decided to also update us on the status of some of the preserved F-104 Starfighters.
We are very pleased with his plan and please find beneath a small photo report sofar including location coordinates.

An (unmarked) F-104A Starfighter was noticed displayed by side of Highway 35 near Ajloun  (coordinates N32.317201, E35.755644).
It does not wear any markings and it will be very hard to identify this aircraft. It looks like it is one of the Mirage decoys from Mafraq because its tail wing is divided and mounted together again.
So this must be aircraft 922 or 923.

This CF-104 Starfighter (obtained from the Turkish Air Force, years ago) with serial 104743 was seen preserved on a pole inside the campus at the Mafraq al-Bayt University (coordinates N32.338981, E36.242016).
This is inside the campus (and no way in) but visible from the road and very hard to make photos of it due to security.