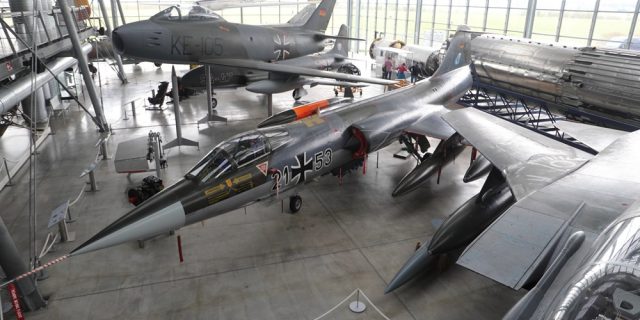 A story by Gary Binnie.

On Saturday April 30th I visited the Deutsches Museum Flugwerft Schleissheim in Munich during a weekend visit to the city.

Walking from the S-Bahn to the museum gave no clues that there was a large museum and airfield nearby.

The first hangar after entering the museum contains piston engine powered aircraft and exhibits from the very first attempts at flight. I have a particular interest in aircraft piston engines and was taking photographs of one when a guide came over and spoke to me.

I thought I was in trouble but he said that I could step over the rope barrier if I wanted to get a better angle. We got chatting and I explained that I was mainly at the museum to see the F-104G Starfighter.

The guide’s eyes lit up and he explained to me that he was the custodian of the F-104 and would I like a guided tour of it. Would I??!!!! My guide was IFS member (clearly a huge fan of the 104!) , Thomas Michel.

We walked into the larger aircraft hall which houses later piston aircraft, experimental types like the Dornier Do 31 and a row of Cold War jets including the F-104.

Parked next to a Tornado it looked quite small but very sleek.

A brief history of 21+53: Built by ARGE Sud in 1964, construction number 7022, codes KE+322, DC+252 and 21+53. Served with JaboG 33 until 1971 then, I believe it was then used as an instructional airframe. It has grey painted wings (no green) indicating a wing change from Marineflieger parts. It was previously displayed in the Munich Deutsches Museum but was exchanged for F-104F 29+03.

21+53 looks to be in the condition it was in when it last flew apart from some skin panels being replaced with clear plastic to view the rudder, stabilator and wing flap actuators (only on the right side).

First stop of the tour was the cockpit, Thomas unlocked the canopy using the external handle (not padlocked as some museum 104s are) and we used an original crew ladder to gain access.

Thomas invited me to climb in. which I did as gracefully as I could. The last operational fighter aircraft that I climbed into would have been a Tornado F3 at RAF Leuchars around 1997. As an airframe fitter I spent a lot of time in the front seat of Lightnings, Buccaneers, F-4 Phantom and Tornado carrying out functional checks of flying controls, landing gear, flaps, nosewheel steering, wheel brakes, speedbrakes etc.

I also regularly manned the cockpit as ‘brake man’ during towing operations, some quite long ones delivering aircraft back to the squadron HAS sites.  Often the canopies would not open again after using all the hydraulic or pneumatic pressure, such fun!

Old habits die hard and I checked the ejection seat face blind handle safety pin, noting that all the seat pins were tethered together by a red ribbon (which also hangs out of the closed cockpit). Thomas explained that this was a late modification, I guess it was done to ensure all seat pins were removed and also to prevent pins dropping on to the floor (they usually go under the rocket pack!).

I dropped down on to the seat and started to take it all in. I adjusted the rudder pedals fully forward (I’m not particularly tall) and touched various controls and switches, testing the ergonomics. Much of the layout was very similar to the F-4. Something was digging in to my back, it may have been a strap buckle but the shoulder straps were neatly snowed over the head box.

With no electrical or hydraulic power it was safe to play ‘hangar pilots’ and I tried some switches and levers. The throttle was easily moved, out of cut off, through the ‘dry’ range and then rocked outboard and pushed fully forward for maximum afterburner.

On the throttle was a push-to-talk (PTT) switch for the radio and on the top was the speedbrake control switch.

Moving forward was the same wheel shaped landing gear lever as the F-4, which also has an override latch on the top to retract the gear on the ground (should it all be going wrong!)

The main instrument panel appeared cluttered to me and it seemed very close, I couldn’t focus on it properly without glasses but a younger man would have no problems. I set the altimeter to QFE which was 998 millibars. I noticed later in a photo that the accelerometer (G meter) was reading maximums of +4 and -1g, it has obviously not been reset since the last flight.

I slid the three plastic glare shields back and forward again.

I counted seven ‘T’ handles (slightly different sizes and colours with their function labelled on them) which caused trouble for some pilots (popping the drag chute instead of adjusting the rudder pedals for instance). This is known as ‘switch pigs’ among RAF aircrew.

The central warning panel and generator switches are in much the same place as the F-4. The side panels seemed to be quite deeply set, it may have been that the seat had been motored into a high position. Some of the switches and circuit breakers didn’t seem easy to get to and would involve being ‘head down’ in the cockpit.

Knowing that the canopy was manually operated I asked if I could close it, no problem says Thomas! I unlatched the hold open lock and used the handle to pull the canopy over and down towards the closed position. About 12 inches (300 mm) short of the closed position it became quite heavy and I was worried that I might drop it but all was well and I lowered it on to the locking cams. A quite light pull on the canopy locking lever locked it with a smooth action.

I felt a little claustrophobic and tried to imagine what it would be like wearing a helmet and mask and then thought about the reality of flying at high speeds and low level in poor weather. I am a licensed pilot but have flown nothing more complicated than a Robin DR400 with a VP prop, I have flown in the rear seat of a Tornado F3 which was a great experience. I was curious what could be seen in the two rear view mirrors, just the tip tanks and stabilator.

I unlocked and opened the canopy easily and pulled the pip-pin out of the canopy breaking knife stowed on the left, quite heavy and nice to see it not taken as a souvenir.

We had a look at the stick/control column next, nosewheel steering switch, ‘coolie hat’ pitch and roll trim switch on the top and paddle switch. Thomas invited me to pull quite hard on the stick and it did seem to move, I’m not sure it moved the stabilator, it’s something that I wouldn’t do without hydraulics in case of control system damage. Thomas later demonstrated easy manual movement of the rudder and ailerons, which I thought wasn’t possible without hydraulics.

One thing I noticed was the smell in the cockpit, especially with the canopy closed. The museum smells generally of aeroplanes (oil, petrol, jet fuel, dope and grease) but this was a slightly different smell. Difficult to describe but there seemed to be a synthetic/plastic type aroma.

Climbing out of the cockpit as gracefully as I could I glanced along the top of the fuselage.

We walked clockwise around the aircraft next, the ram air turbine (RAT) is extended and the turbine  itself turns easily by hand.

A gentle push down on the nose of the tip tank had it flexing the wing for a few seconds.

The hydraulic system has been emptied of fluid, the speedbrakes can be opened simply by pulling them with fingernails at the trailing edge, all very clean inside.

The engine is installed, it is the later BMW J79 with a distinctly different nozzle to the -11 engine. On this aircraft the nozzle is in the fully closed position which it wouldn’t be normally. The aircraft is standing on short jacks to preserve the tyres so it wasn’t possible to look in to the jet pipe.

The hydraulic door was next, it was open and, again, very clean. Ground crew must have appreciated the convenience of ground test connections, accumulators, filters and reservoir gauges all grouped together.

We passed the left tip tank to the M61 Vulcan gun bay, Thomas opened the rear hatch and unfastened the canvas cover, pointing out that the firing pin (pins?) had been removed as part of the demilitarisation process. The six barrels were easily rotated by hand.

Standing by the gun bay I ran a finger over some of the fuselage stencils and discovered that they are not painted but are self-adhesive stickers, which explains why they are so consistent and neat. On RAF aircraft we created stencilled words out of interlocking brass letter masks and dabbed paint on with a sponge!

There is a complete NASARR radar set next to the nose, Thomas said it was more convenient to show this than remove the radome/nose cone which he said was difficult and heavy.

Another related exhibit is a short section of wing with the flaps down and a working BLC system. An electric pump provides the air flow.

Rewinding to the right speedbrake I glanced toward the T-33 parked next to the 104 and spotted a complete main landing gear assembly mounted in a frame as a training aid, and it works!

I have a fond attachment to landing gears, I worked on VC10 gear for several years, total strip, inspect and rebuild. The rig has a small hydraulic system powered by an electric pump and runs at 1,000 psi (70 Bar) instead of the full system pressure (3,000 psi (210 Bar)). This would be done for safety but mainly to slow the retraction sequence down so that its operation can be easily seen.

One thing I noticed is that the retraction cylinder body rotates at the start and end of the sequence, I guess this is to unlock/lock internal fingers. I could have watched it all day!!

My dear wife had been sitting patiently through all this and I felt it best to rejoin her for a while then break for lunch.

Thomas also had a break in the museum cafeteria and told me that he had documented the history of 21+53 and work carried out since it has been in the museum and had written a book. He kindly signed one for me.  ‘Lockheed Starfighter F-104G (21+53) Deutsches Museum Flugwerft Schleißheim’, Delta Image, Dachau www.deltaimage.de

I walked around the museum one more time in case I missed anything, there are balconies that give very good views of the aircraft, especially the gliders and smaller aircraft that are suspended from the roof.

I checked that my camera had actually taken images (it will operate without a memory card!) and then left the museum, taking the S-Bahn back to Munich.

I’m still buzzing about the whole experience, I would have been happy just to get some photos of the 104, a chance meeting with another Starfighter enthusiast turned the visit in to something really special that I will remember for a very long time. My eternal thanks to Thomas for the experience.